A New Look at the Kennedy-Reagan Growth Recipe

JFK and the Reagan Revolution argues that America can return to prosperity by looking to the Kennedy-Reagan model of income tax cuts and a strong, stable dollar. 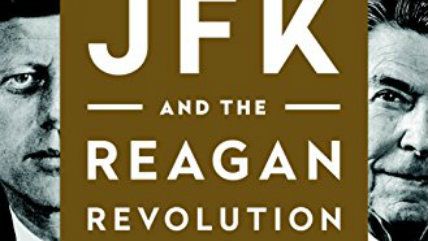 ("JFK and the Reagan Revolution"cover)

America can return to prosperity and robust economic growth by looking to the Kennedy-Reagan model of income tax cuts and a strong, stable dollar, a new book argues. JFK and the Reagan Revolution: A Secret History of American Prosperity, by Lawrence Kudlow and Brian Domitrovic, will be published this week by Penguin Random House's Portfolio imprint. It tells the story of how the tax and monetary policies of Presidents Kennedy and Reagan triggered impressive economic growth.

As Kudlow and Domitrovic describe it in their introduction, "the combination of a strong and stable dollar with big, permanent, across-the-board tax rate cuts" can lead to a near-utopia. "Budget deficits, the retirement crisis, student loans, unaffordable health care, poor schools, [problems of] inner cities—all these things will fade away as lasting economic growth takes hold."

Kudlow couldn't have been more gracious three years ago when my own book JFK, Conservative was published, and part of what I want to do here is repay the kindness.

My own suggestions that the Kennedy tax cuts might be a useful model today have been met consistently and predictably by liberal objections that today's top income tax rates are considerably lower than the 91 percent top federal rate that obtained before Kennedy won a reduction to 70 percent. There's less room to cut now, the argument goes, and the effects on incentives and growth would be concomitantly less powerful.

What's more, neither the Democratic presidential candidate, Hillary Clinton, nor the Republican one, Donald Trump, has been campaigning on a Kennedy-Reagan-Kudlow-Domitrovic platform. Clinton, while talking some about both economic growth and tax simplification, has also been calling for increased taxes on top earners and on some capital gains. Trump, while proposing some substantial income tax rate reductions, has also threatened to increase tariffs on imports. If that is more than just a negotiating threat, it would create a sharp contrast with Kennedy, who, Kudlow and Domitrovic write, "spurred the biggest round of tariff reductions of modern times."

So are the Kennedy and Reagan examples irrelevant?

JFK and the Reagan Revolution doesn't really get into it, but it's worth mentioning that both presidents also spent heavily on arms buildups, pursuing a peace-through-strength approach to national security. They were fighting a Cold War against the Soviet Union, but some might argue that a similar strategy is in order now against the Islamic State or other manifestations of militant Islam.

As for the argument that marginal rates today are lower than the ones that either Reagan or Kennedy began paring, I'd argue that there's still plenty of room to cut. State and local income taxes piled atop the federal ones mean marginal top rates for Californians or New York City residents are more than 50 percent. That means various governments take more than half of every additional dollar earned. At lower levels, phase-outs of benefits and subsidies create even steeper effective marginal rates.

At 39.6 percent, the top federal rate is considerably higher than the 28 percent rate that Reagan left it at. Remember, too, the Sixteenth Amendment that gave the government the power to levy a federal income tax was only ratified in 1913, well more than a century after the country was founded.

One useful contribution of JFK and the Reagan Revolution is to remind readers that Kennedy and Reagan didn't necessarily start off as tax-cutters, either. Reagan raised taxes as governor of California. When he ran for president in 1976, he insisted that tax cuts needed to be offset by spending cuts. As a congressman, Kennedy voted against tax cuts championed by Senator Robert Taft of Ohio.

Kudlow and Domitrovic remind us, too, that even the Wall Street Journal editorial page, under the leadership of Vermont Royster and then Robert Bartley, was initially skeptical of tax cuts in the absence of a balanced budget. "It took a while for Bartley to be won over," the authors write, "about two years," to be precise.

Maybe Clinton or Trump will come around, too. Or if not, perhaps one or the other will be displaced in 2020 by a candidate who understands what Kennedy and Reagan did about growth and how to achieve it.