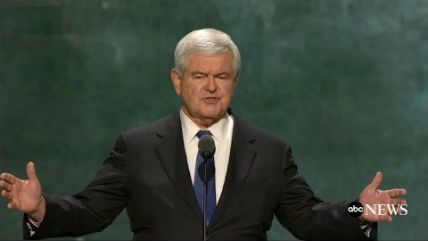 Mexican President by day, firm immigration speech by night. Good example of how energetic and audacious a Trump Presidency will be.

Energetic and audacious! I can think of other words to describe a speech advocating federal "ideological certification," heavy "consequences" for U.S. companies that relocate, getting Gulf States to pay for safe zones in Syria, and Lord knows what else, but hey look! The media!

There's more in that vein over at Gingrich's Twitter feed.

Well, what if I told you there was another critic of a GOP presidential nominee's harsh-sounding immigration politics who warned that such "rhetoric can kill the Republican Party among Latinos," only this time it wasn't some subversive left-wing cop hater in a decadent enclave, but, uh, Newt Gingrich? Check him on out from February 2013, as reported by The Hill:

"It is difficult to understand how someone running for President of the United States, a country with more than 50 million Hispanic citizens, could fail to acknowledge that the American people should not take grandmothers who have been here 25 years, have deep family and community ties — and forcibly expel them," he writes before attacking Romney for his comments on "self-deportation," warning that "rhetoric can kill the Republican Party among Latinos." […]

"I write this because as the current immigration debate heats up it is critical for us to recognize that words and attitudes really matter," he writes. "Understanding what people hear matters. We may not mean to say what people hear we say. After decades in politics this is a lesson I have learned the hard way. As a party, we simply cannot continue with immigration rhetoric that in 2012 became catastrophic—in large part because it was not grounded in reality."

Mitt Romney, it cannot be stated enough, ran his 2012 GOP primary campaign as a hawk's hawk on immigration, bashing Gingrich as a softy, and claiming (ludicrously) that Rick Perry's in-state tuition rates for illegal-immigrant kids in Texas was "a magnet to draw illegals into the state." As for the buffoonish Gingrich, his mouth is capable of stringing together endless combinations of words, including, this March, "Trump's shift toward inclusiveness, team effort and unity was vitally important. He has to build a Reagan like inclusiveness to win this fall."

Whatever the defective habits of mind and politics that produced and enabled yesterday's display of dystopian fabulism—scratch that, unassailable policy—it predated Trump's involvement in Republican politics and will certainly outlive his exit.