To paraphrase Oliver, parents in Detroit should Google their local public school to ensure it wasn't previously run by a principal who pleaded guilty to theft. 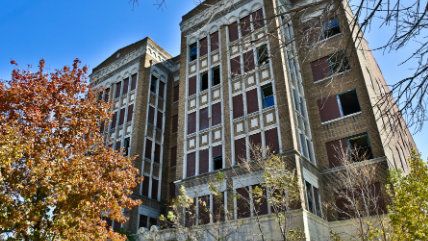 During one part of his blistering but ill-informed takedown of charter schools, HBO's John Oliver zeroed in on what he called a track record of financial abuses by charter school executives.

After detailing how the CEOs of charter schools in Florida and Pennsylvania had recently been convicted of embezzling school funds to enrich themselves, Oliver stressed that the two incidents were not outliers.

"In Philadelphia alone, at least 10 executives or top administrators had pled guilty in the last decade to charges like fraud, misuse of funds or obstruction of justice," he said.

The point—or at least of the points—Oliver was trying to make is one that charter school opponents have been pressing for years: Charter schools, even when run as nonprofits, are conduits for greedy capitalists to siphon dollars from the public education system into their own pockets. Oliver is right that there have been some crony capitalists and outright crooks who have been caught using the charter school system to line their own pockets, and those people absolutely deserve to be punished for the damage they've done to public finances and to students' lives.

As a matter of policy, though, we have to ask whether those abuses cancel out all the good charter schools have done for kids and for the public education system as a whole (Reason's Nick Gillespie has a detailed look at all that).

If you think it does, then you'd have to apply the same standard to the traditional public school system—something that few charter critics seem willing to do.

You'd have to consider, for example, that the decade's worth of crimes detailed in Oliver's piece on charter schools are roughly equal to what's happened just this year in the Detroit Public Schools system.

In March, federal prosecutors filed charges against 13 administrators in the Detroit Public Schools for taking bribes and kick-backs as part of a $2.7 million scam. For 13 years, a school supplies vending company run by Norman Shy was submitting fraudulent invoices to the DPS, causing the school system to pay for paper, pencils and other goods that were never delivered to the classrooms, prosecutors said. One of the people charged was Clara Flowers, a former principal who is now an assistant superintendent for the entire district.

Shy allegedly paid more than $900,000 in the form of checks, cash and prepaid gift cards to the 13 current and former principals who signed off on fraudulent invoices. While the scam was running, there were persistent stories in the Detroit media about schools running low on supplies and teachers being forced to dip into their own paychecks to cover basic classroom needs. That's a noble thing for any educator to do, but it would be nice if they weren't forced to do it because their principals were helping a vendor get rich off taxpayer money

"To enrich oneself at the expense of school children is bad enough, but to misapply public funds intended to educate kids in a district where overall needs are so deep, funding sources are so strained, and the need for better education is so crucial, is reprehensible and an insult to those educators working every day to make a better future for our children," said David P. Gelios, special agent in charge of the bure FBI's Detroit Division.

As Oliver might put it: "You can say 'that's an isolated incident,' but it isn't."

In June, the former director of grant development for the Detroit Public Schools pleaded guilty to federal fraud charges after she was caught pocketing more than $1.2 million that was supposed to be used for tutoring services. Over the course of seven years, Carolyn Starkey-Darden created multiple fake companies and submitted phony invoices that included false test scores, forged signatures and fake individual learning plans, the Detroit Free Press reported. She will be sentenced in October and could face up to 10 years in prison.

She wasn't even being all that creative about it. One of the fake businesses Starkey-Darden used to pay herself was called "Grants 'N Stuff," the paper reported.

Starkey-Darden's guilty plea was filed just days after former Detroit principal Kenyatta Wilbourn Snapp was sentenced to a year in prison for her role in a separate bribery and kick-back scheme. Snapp pleaded guilty to conspiring to take school funds and laundering money after getting caught taking 11 bribes totaling $58,000 as part of a scam allowing two contractors to get paid for services they never delivered.

None of this is meant to forgive the crimes of charter school executives or suggest that abusing the public purse (and the public trust when it comes to educating kids) is a less serious offense because it happens in other public schools too.

Still, charter schools can be shut down. They can be held accountable in ways that the mainstream public school system will never be. It's better for a student to be forced to leave a bad school because it's being forced to close its doors than for that student to remain in a bad school because it's part of an unassailable institution that will lumber onward no matter how poorly it is run or how many students it fails to educate.

Let's go back to Oliver one more time. He joked about the fact that Philly Magazine has warned parents they should "Google any schools you're looking at to make sure they weren't once unexpectedly shut down or run by a CEO who pleaded guilty to theft."

Sure, parents should check out any school where they might send their children. If that school has a bad history or has been run by a CEO who didn't put students first, parents would be wise to avoid it. That's part of the beauty of the charter school system: if schools are run like that, families can leave and seek a better education elsewhere.

That's exactly what they are doing. In Detroit, for example, more than 55 percent of students are now attending charter schools.

With the recent crime wave in the Detroit Public Schools system, more might make the decision to leave. To paraphrase Oliver, parents in Detroit might want to start googling their local public school to make sure it wasn't previously run by a principal who pleaded guilty to theft.