Would she allow the rest of us to be equally protected? 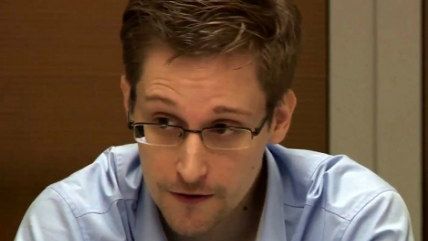 Hillary Clinton may want Edward Snowden to stand trial for leaking information about the federal government's expansive surveillance of American citizens, but apparently that doesn't mean her campaign won't take advantage of his cybersecurity expertise.

In a tech piece posted over at Vanity Fair, reporter Nick Bilton notes that the Clinton campaign has jumped on an application called "Signal," a heavily encrypted private communications program. A visit to the site of developers Open Whisper Systems shows an endorsement by both Snowden and Laura Poitras, the filmmaker who made the documentary Citizenfour about Snowden's whistleblowing.

And in Vanity Fair's piece, the fact that the app was "Snowden-approved" was used to encourage its adoption to keep communications out of the hands of Russian hackers.

Snowden raised an eyebrow about it on Twitter, noting that Clinton called for him to face trial and possible imprisonment just last year. (I would add here that Clinton has said Snowden should have gone through the proper channels and incorrectly believes he would have whistleblower protections.)

Techdirt also takes note that Clinton herself is kind of vague about where she stands on cybersecurity policy when it comes to areas like encryption. She's one of those politicians who wants to have it both ways. It seems clear that she doesn't necessarily support mandatory "back doors" that require tech companies to provide access to law enforcement or the government to bypass encryption, but she also believes in the unicorn that Silicon Valley eggheads can come up with some magical key that only the "good guys" (the government will obviously determine who those might be) can use. She has previously said she wants some sort of "Manhattan Project" between the tech industry and the government to figure it all out.

Maybe Clinton's tech policy briefing that her campaign released in June might help straighten out where she actually stands on tech privacy and security? Sadly no. Try and tease an actual policy out of this paragraph on encryption:

Hillary rejects the false choice between privacy interests and keeping Americans safe. She was a proponent of the USA Freedom Act, and she supports Senator Mark Warner and Representative Mike McCaul's idea for a national commission on digital security and encryption. This commission will work with the technology and public safety communities to address the needs of law enforcement, protect the privacy and security of all Americans that use technology, assess how innovation might point to new policy approaches, and advance our larger national security and global competitiveness interests.

All throughout the tech initiative paper, it is chock full of extremely specific proposals (which I've critiqued before as essentially a call for tech industry government lobbying for handouts). But the above paragraph says very little but to say that they'll look into the matter.

There's two possibilities to consider: One, that her campaign maybe recognizes that trying to fight encryption is a doomed effort, and the committee is being promoted as the place for the negotiations to go and quietly die. Alternatively, though, there's the terrible precedent of President Barack Obama's administration, which made a big deal out of protecting consumer data privacy. It publicly opposed legislation to promote the sharing of private consumer data with the government in order to help fight cybercrime. But then it quietly worked with lawmakers to get what it wanted, and we ended up with a law that encourages private companies to hand your consumer data over to the government in order to fight all sorts of types of crimes, and then subsequently immunizes these companies from financial liability for breaches.

This was an increase in government surveillance authority, without a doubt. Is there any reason to expect anything different from Clinton, who is openly promising to continue pretty much all of Obama's policies?

Below, Reason's Nick Gillespie interviewed Snowden earlier in the year: