I guess you could call this a pivot. 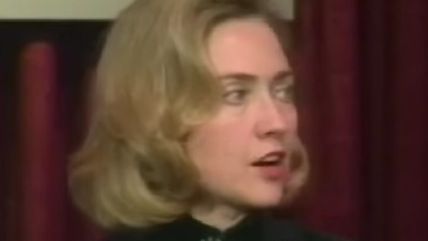 If you had "Donald Trump denounces over-the-top law-and-order rhetoric" in this week's pool, step up to collect your winnings:

"@Jimbos2002: @Morning_Joe Video: Hillary referring to blacks as super predators that need to be brought to heel. https://t.co/pMIHWayMRw"

The clip shows Clinton speaking in New Hampshire in 1996; the description in the tweet isn't precisely right, but it really is an appalling video. Even as America was entering a long decline in violent crime, Clinton was warning that subhuman monsters were on the prowl. "They are not just gangs of kids anymore," she announced. "They are often the kinds of kids that are called superpredators. No conscience. No empathy. We can talk about why they ended up that way, but first we have to bring them to heel."

That moment became infamous during the 2016 primaries, and Clinton eventually apologized for it, though her apology focused on her choice of words rather than the ideas underlying her language. The primaries also saw her make a show of supporting some sorts of criminal justice reform, though she stopped well short of endorsing the systemic changes required to reverse the mass incarceration she played a role in building. So while the candidate has walked back her comments, it is perfectly legitimate to bring them up, both to remind people of her past and to push a more serious reform agenda. But that critique sounds hollow coming from Trump, who has been running on exactly the sort of hopped-up law-and-order talk that Clinton was spouting in her superpredators speech. It's been just a month since the man was invoking some recent attacks on police officers to declare Obama's America "a more dangerous environment than frankly I have ever seen, and anybody in this room has ever watched or seen." That's just as absurd a piece of fearmongering as Clinton's claims about monster gangs.

By the way: Were you wondering where Clinton got that word "superpredators"? There was a whole superpredator panic in the '90s, fueled by a small group of criminologists who later conceded that they'd been wrong. The most influential was John J. DiIulio Jr., the neoconservative academic who told us that "the demographic bulge of the next 10 years will unleash an army of young male predatory street criminals who will make even the leaders of the Bloods and Crips…look tame by comparison." Last fall I wrote a post here at Hit & Run about that panic, and you can find more details by reading it. It includes that same Clinton clip that Trump highlighted. In fact, the YouTube video that he linked to was the very one I uploaded so I could embed it in my post. I'm glad to see it enjoying a second life; I just wish I could believe that either one of these candidates was serious about moving in a different direction.