The Justice Department Is Wrong. Private Prisons Aren't the Problem.

Private prisons are a symptom. Mass incarceration is the disease. 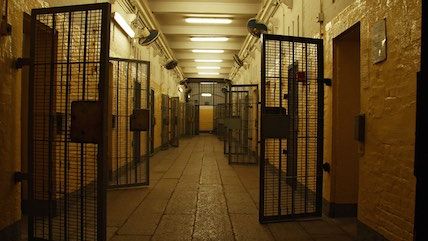 Liberal critics of the U.S. criminal justice system overwhelming cheered the Justice Department's recent decision to cancel federal contracts with private prisons. Their enthusiasm for this misguided half-measure is disappointing, and betrays a fundamental misunderstanding of the real problem.

If left-leaning reformers understand this, many of them aren't letting on. Black Lives Matter activist Shaun King hailed the Justice Department's decision as a "huge deal." Ilyse Hogue, the president of NARAL, called it "one of the most significant victories of the decade." California's Democratic Attorney General Kamala Harris said that she applauds the decision. "Mass incarceration should not be incentivized by private gain."

As Reason's C.J. Ciaramella points out, the federal Bureau of Prisons started contracting with private corporations in 1997. The government took this step to help alleviate overcrowding, having arrested and imprisoned huge swaths of the population as a response to public panic stemming from the crime wave of the 1980s and early '90s. Incarcerating so many people was an overreaction to the problem—it was bad public policy, and terribly costly. The rise of private prisons is a symptom of this mistake, and getting rid of them without addressing the underlying condition that made them necessary in the first place is counter-productive to the cause of criminal justice reform.

Where are these federal prisoners going to go? Back to publicly-run prisons? It might very well be the case that further overcrowding of public prisons is the consequence of closing private prisons. While it may delight liberals to know that private companies aren't making money off of prisoners' misery anymore, the prisoners will still be, well, prisoners. They might even be more miserable, living in more closely confined quarters and competing with even more inmates for prison resources.

The Justice Department claims that it reviewed its private prisons and found them lacking. "They simply do not provide the same level of correctional services, programs, and resources; they do not save substantially on costs; and as noted in a recent report by the Department's Office of Inspector General, they do not maintain the same level of safety and security," wrote Deputy Attorney General Sally Yates, according to The Washington Post. This matches the public perception of private prisons. The media routinely portrays them as less safe: the most recent season of Orange is the New Black insists that privatization is nothing short of a humanitarian crisis for inmates, and Mother Jones garnered universal acclaim for an investigative report on the inadequacies of a private prison in Louisiana.

No one disagrees that private prisons have huge problems, are often mismanaged, and frequently neglect inmates' safety. But public prisons are plagued by the exact same problems. It's not clear that one kind is clearly better run than the other. And private prisons have at least one important advantage over public prisons: it's easier to hold management responsible when management is someone other than the government. As Reason's Leonard Gilroy and Adrian Moore observed, "If dissatisfied with performance, a government can cancel a prison contract with a private company. By contrast, the government tends not to fire itself, and the watchmen ultimately watch themselves."

Concerns that private corporations will pack their prisons as tightly as possible in order to take in more inmates—and thus, more funds—are legitimate. But public prisons have worrisome incentives, too. Unions representing prison guards, for instance, want their prisons overflowing: they want to protect their members' jobs.

Keep in mind that the overwhelming majority of prisoners—state and federal prisoners—are locked up in a public prison. Private prisons hold just about 10 percent of all inmates. The Justice Department's order only applies to federal prisoners, but even if it were expanded to cover all prisoners—a legally dubious move, to be sure—this just wouldn't be a very big slice of the pie.

But more importantly, what good would it do these prisoners, anyway? They will still be locked up, and that's the real public problem, not the manager overseeing their confinement.

Most federal prisoners in privately-run prisons, in fact, have violated immigration laws. If the federal government really wanted to do something for these people, it could enforce immigration laws differently and re-sentence prisoners. The U.S. government should imprison fewer people whose only crime was trying to live in this country, and it should find ways to manage other criminals that do not require locking them up for decades. The government could, for instance, focus on rehabilitation and reducing recidivism. It could require prisons to develop programs to accomplish these priorities, with the ultimate goal of reducing the prison population (and potential prison population), saving money in the long run.

In reality, some state and local governments are already doing this—with private prisons. Pennsylvania, for instance, made reducing recidivism rates among prisoners a factor in determining compensation for private prisons. And governmental authorities in New York and Massachusetts are making creative use of private investment to achieve desirable prison goals. (For more information on these programs, read Gilroy and Moore's article.)

Bernie Sanders wants to ban private prisons entirely, and many liberals apparently agree with him. (Democratic presidential candidate Hillary Clinton has merely stopped accepting campaign donations from corporations that run them.) It would take a lot of political effort to accomplish this, and it would be a huge waste. Private prisons aren't a problem—they are, like all prisons, the symptom of a problem (over-criminalization, over-enforcement, and over-incarceration) that all proponents of criminal justice reform should be working together to fix.