The new rules will discourage smokers from switching to vaping, a much less dangerous alternative. 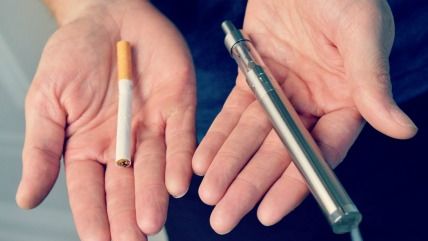 The Food and Drug Administration's e-cigarette regulations, which took effect last week, immediately struck two blows against public health. As of Monday, companies that sell vaping equipment and the fluids that fill them are forbidden to share potentially lifesaving information about those products with their customers. They are also forbidden to make their products safer, more convenient, or more pleasant to use.

The FDA's censorship and its ban on innovation will discourage smokers from switching to vaping, even though that switch would dramatically reduce the health risks they face. That effect will be compounded by the FDA's requirement that manufacturers obtain its approval for any vaping products they want to keep on the market for longer than two years. The cost of meeting that requirement will force many companies out of business and force those that remain to shrink their offerings, dramatically reducing competition and variety.

All of this is unambiguously bad for consumers and bad for public health. Yet the FDA took none of it into account when it estimated the costs imposed by its regulations, simply assuming that good intentions would ensure good results.

Although preventing fraud is the official intent of the FDA's speech restrictions, the agency's rules prohibit statements that are accurate and highly relevant to consumers choosing between smoking and vaping. Nicopure, one of the companies that is challenging the FDA's regulations in federal court, used to tell consumers that in vaping "nothing is burned," "no smoke is released," and "no ash" is generated. It also noted that the aerosol produced by e-cigarettes contains "no tar" and only "a fraction of the 4000 chemicals currently found in standard tobacco cigarettes." Although all of these statements are indisputably true, they are illegal under the FDA's reading of the Family Smoking Prevention and Tobacco Control Act.

That law gave the FDA authority over tobacco products, a category to which it has arbitrarily assigned tobacco-free e-cigarettes, even when they contain nicotine that is not derived from tobacco or no nicotine at all. The Tobacco Control Act prohibits unapproved "modified risk" claims, including any "explicit or implicit representation that [a] tobacco product or its smoke does not contain or is free of a substance or contains a reduced level of a substance, or presents a reduced exposure to a substance in tobacco smoke." According to the FDA, that means e-cigarette companies are not allowed to advertise the main advantage of their products. Even describing an e-cigarette as "smokeless" or "smoke-free" is asking for trouble, since "the Agency will evaluate an [e-cigarette] manufacturer's use of 'smokeless' or 'smoke-free' (and similar descriptive terms) on a case-by-case basis."

Instead of immediately banning all e-cigarettes and e-fluids, the FDA gave manufacturers a couple of years to seek approval for each of their products. But that grace period does not apply to any variations introduced after August 8, 2016, so the FDA has in effect banned product improvements. In a declaration supporting Nicopure's lawsuit, CEO Jeff Stamler notes that his company "introduced approximately 288 new e-liquid products, 6 new vaporizer products, and 23 new vaporizer components" in 2015 alone. Now any new product requires premarket approval, so "as a practical matter Nicopure will be unable to introduce new products for several years."

The ban applies even to minor changes. The American Vaping Association notes that "any variation of the nicotine level, bottle size, flavor amount, ingredient type, etc. in a current product (i.e., one being marketed on August 8, 2016) will result in a 'new' product that will be illegal to sell without preapproval from the FDA." But the FDA is also blocking substantial improvements in the designs of vaping systems and their components, changes that could make them easier or cheaper to use, extend battery life, or protect against pitfalls such as overheating. It is in the interest of profit-seeking companies to constantly look for changes that make their products more appealing to consumers, which in this case means encouraging smokers to make a switch that could save their lives. The FDA's response to such beneficial innovation: Cut it out.

The loss of competition, innovation, and variety will only grow worse over time, as the deadline for getting FDA approval or getting out of the market approaches. The cost of submitting a "premarket tobacco product application" (PMTA) is uncertain, and so is the extent of the resulting shakeout. The FDA estimates that each application will cost from $182,000 to $2 million for e-liquids and from $286,000 to $2.6 million for "electronic nicotine delivery systems" (ENDS). On the assumption that some applications will cover more than one product (which the FDA says is possible if they are sufficiently similar), the agency puts the average cost per product between $12,000 and $403,000 for e-liquids and between $29,000 and $2.6 million for ENDS.

Those are very wide ranges, of course, and the actual costs will depend on the nature of the product and the sort of evidence the FDA demands in order to conclude that approval is "appropriate for the protection of public health." The FDA has given mixed signals about whether and when expensive and time-consuming clinical testing, as opposed to product-specific chemical analysis and general research on the hazards of vaping, will be required, and it's not clear how the agency will try to predict future consumer behavior, as required by its mandate to assess a product's net long-term impact on "the population as a whole."

Stamler, Nicopure's CEO, says his company "anticipates that PMTAs will cost much more" than the FDA estimates, "with each e-liquid PMTA costing at least $5 million, and each vaporizer (or vaporizer component) PMTA costing at least $3 million." Stamler says Nicopure alone would have to submit thousands of PMTAs to keep its current products on the market but probably will be able to manage no more than a dozen within the next two years.

That gives you a sense of how dramatically FDA regulation will affect consumer choice. So does the FDA's expectation that it will receive only 750 or so PMTAs a year from an industry that includes hundreds of "formal manufacturers," each of which may produce dozens, hundreds, or thousands of product variations. Lost Art Liquids, which has filed its own lawsuit against the FDA, says it will "need to file over·200 PMTAs if it wishes to keep all of its current products on the market." Again, that's just one company.

The FDA's count of 168 to 204 "formal manufacturers," which it admits could be way off, does not include the thousands of vape shops (as many as 7,000, per the FDA) that qualify as manufacturers because they mix their own e-liquids. The FDA assumes they will stop doing that rather than bear the costs of regulation as manufacturers. Since custom-made fluids are a major selling point for vape shops, many of them may go out of business entirely.

These small businesses also will be hampered by FDA rules that ban free samples (supposedly to protect minors, who are not allowed in vape shops to begin with) and prohibit retailers from helping customers assemble or fix vaping systems (which would transform them back into manufacturers). "Traditionally," the American Vaping Association notes, "vape shop employees have educated new customers about proper care and usage of a device by physically assisting the customer with setting up their device or actively troubleshooting problems." No more of that.

The new rules undermine public health, their raison d'être, along with consumer choice and customer service. A brief that 16 advocates of tobacco harm reduction filed last week in support of Nicopure's lawsuit notes that the cost of the FDA's regulations will far outweigh their benefit if they cause even a small percentage of vapers to start smoking again or deter even a small percentage of current smokers from switching. That's because of the huge difference in risk between e-cigarettes and the conventional kind (at least 95 percent, according to the Royal College of Physicians), plus the high cost assigned to each lost "quality-adjusted life-year" (QALY). If just 1 percent of the country's 8.3 million vapers smoke more as a result of the FDA's regulations and that change causes just one lost QALY for each person, the brief says, "that would create a cost of $39-$65 billion undiscounted." By contrast, the FDA's regulatory impact analysis put the total cost of its rules at less than $1 billion.

Whether e-cigarettes "have a net benefit on or harm to public health at the population level," the FDA declares, "regulation of ENDS will still benefit public health." That follows only if you assume regulation has no negative impact on health-related consumer behavior, which is pretty much what the FDA does. It asserts that its regulations will benefit public health but does not attempt to quantify the effect, arguing that even the most conservative projection would justify the rules. The FDA acknowledges that its regulations might also harm public health by retarding the substitution of vaping for smoking. But it does not include that cost in its analysis, deeming it too speculative. The FDA literally assigns zero value to the lives of smokers who would have quit were it not for the agency's heavy-handed meddling.