"We're not screwing around, Philly," the city's Department of Licenses and Inspections warns. 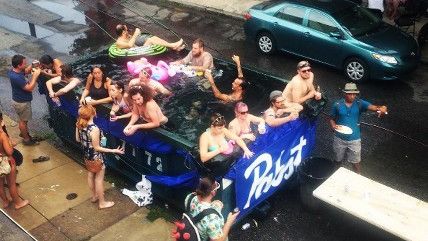 Justin Myers, one of the co-organizers of Philadelphia's annual Cedar Street Block Party, wanted to add a new attraction to go along with the adult-sized slip-and-slide and "Beer Olympics" that were already mainstays of the event. His eureka idea: renting a dumpster and converting it into an above-ground street pool.

Myers told BillyPenn.com a dumpster seemed like the right call for such a conversion because "it's sturdy, it's rentable and I can just give it back," though he says he had to call "about 10 dumpster companies" before he found one not so terrified of a lawsuit that they wouldn't do business with him.

The Cedar Street compatriots power-washed the giant garbage bin, lined the bottom with plywood, and softened the corners with flotation noodles. Then, they commandeered approximately 3,000 gallons of water from a nearby fire hydrant, bringing the water to about waist level for an adult.

No kids were permitted in the dumpster pool. No property damage or injuries were reported. Fun was had.

And last weekend's block party was a hit with at least one neighbor, who told CBSPhilly, "There was diversity of people that were present to do one thing…. HAVE A GOOD TIME. It was at the expense of NO ONE. Nothing but joy that day. Kudos to these two and their whole crew that helped….Thank you! Thank you! Thank you!"

It should come as no surprise that the City of Philadelphia's Department of Licenses and Inspections is not amused.

In a statement issued Wednesday, a department spokesperson wrote that the "the City's commitment to public health, safety and basic common sense" will preclude them from issuing permits to "swim in a receptacle most often used for waste." The city's reasoning included:

Just to let you know that the bureaucrats who wrote this memo are not robots, but indeed denizens of the City of Brotherly Love, they made sure to include this flourish near the end:

We are not screwing around, Philly. The Streets Department will not issue any future block party permits to the 2400 block of Cedar, and officials have contacted the dumpster rental company regarding its failures to obtain the proper closure permits and to take mandatory measures to protect the street during placement of the dumpster.

No more screwing around at your urban block parties, Philadelphia.