William Weld, Libertarian Vice Presidential Candidate, Thinks No One on a Terror Watch List Should Be Able to Buy A Gun 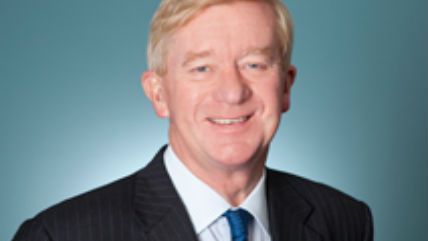 Former federal prosecutor, governor of Massachusetts, Hugo Black fan, and Libertarian vice presidential candidate William Weld tells a reporter from Revolt TV that "the problem with handguns is probably even worse than the problem of the AR-15" (not sure why) and "you shouldn't have anybody who's on a terrorist watch list be able to buy any gun at all."

(Start around 16:40 in the video at the above Revolt TV link)

Official campaign spokesman Joe Hunter said differently on this topic of watch lists and gun rights on Gary Johnson's behalf back in June, writing in a statement that "Gov. Johnson believes Second Amendment rights are too fundamental to be denied without due process, and being put on a list arbitrarily by the government is certainly not due process." (That's the right answer.)

Here at Reason, Scott Shackford, Judge Andrew Napolitano, Jacob Sullum, and I have all written on why giving the government the power to arbitrarily deny people a core constitutional right by placing them on a list is a crummy idea.

More on general Libertarian disquiet over Weld, and Weld defending himself to Libertarians in this video from Reason TV: