In Our Uber-ed Out Future, Cities Won't Be Covered With Ugly Parking Garages 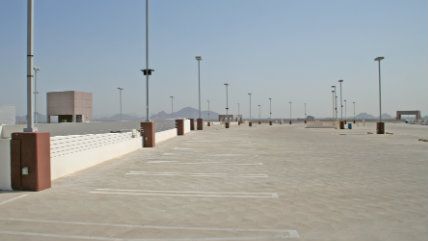 If Bill Gurley's right, American cities are about to get a whole lot more free space.

That's because they won't need as many space-wasting parking lots and eyesore parking garages to store the thousands of cars that sit unused between morning rush hour and its evening counterpart.

"This will be the way that you solve mass transportation problems," Gurley, an Uber board member, told Bloomberg West on Monday night. "And it has the ability in the U.S. to create much more efficient cities."

Most American cities are built around the idea of car ownership. As Gurley told Bloomberg's Cory Johnson, that means "you cover most of your geography with cement."

But that might not be necessary much longer. In the next decade, Uber plans to compete head-to-head with government-run mass transit services and eventually to become a full-fledged alternative to car ownership.

"I think you will see over the next 5 to 10 years, Uber to continue to invest all it can in the types of algorithms that drive that price point down," Gurley said. "We want to be the price leader in the market."

That would be a game-changing development for commuters, and for the cities where they work–and park.

A 2014 study by civil engineering professors at the University of Connecticut looked at aerial photos of more than a dozen U.S. cities over a period of five decades. They found some cities, like New Haven, Connecticut, had experienced a five-fold increase in parking lots and garages since the 1950s (the study didn't look at street parking). That's not unexpected, of course, as many cities lost population to the suburbs during the second half of the 20th Century and responded by building more parking facilities to provide for commuters and visitors.

But those cities are missing out on thousands of dollars every year by using all that land for parking rather than more lucrative development, lead researcher Norton Garrick told Bloomberg in 2014.

As ride-sharing evolves, those parking lots could be torn down and the space used for other, better purposes. That doesn't even touch on the aesthetic benefits of getting rid of all that concrete in downtowns.

Meanwhile, services like UberPool allow a computer algorithm to design what are essentially bus routes created in real time based on riders' demands—rather than designed by city planners and set in stone.

Uber already has partnerships with government transportation agencies in cities such as Atlanta, Dallas, and Los Angeles, as Jared Meyer wrote earlier this year. The point of these partnerships, Meyer writes, is to create greater integration between government transit systems and Uber by coordinating the systems' and Uber's apps.

It's not hard to see how that could replace much of the current demand for mass transit services.

The only thing that might get in the way of this better transportation future, as Ronald Bailey wrote in Reason's July issue, is the politicians who fear change and refuse to embrace the new technology that could reshape our cities and the way we commute.

If they allow people like Gurley to follow through with his plans, we'll have more, and cheaper, ride-sharing along with fewer parking garages, parking lots and public buses.

That means American cities of the future are going to be cleaner, more beautiful and way easier to navigate.