Begun the War Between Jedis and Atheists Has, in Australia

"Jedis" are rapidly increasing in Oz, which pisses off non-believers for some good and bad reasons. 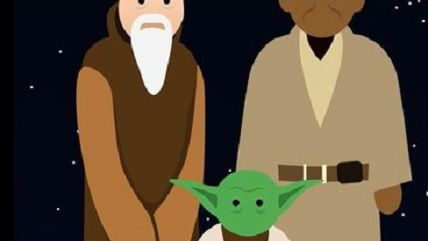 "Australia," a country in a galaxy far, far away from America, has been experiencing a remarkable growth in the number of residents who say they adhere to the "Jedi" religion of Star Wars.

In the 2006 census, 58,000 people claimed to practice it, and that number jumped to more than 64,000 five years later, or just slightly below the number of Sikhs living downunder. On the eve of the next census (Aussies do one every five years), atheists are worried that Jedis will move even further up the charts, as "as a harmless way to declare their Star Wars fandom and give the government the middle finger at the same time."

And that's a problem why, exactly?

The folks at the Atheist Foundation of Australia argue, according to Gizmodo,

When officially counted, Jedi gets classified as a "Not Defined" religion instead of "No Religion." When that happens, they believe "it makes Australia seem more religious than it really is." Which, again, doesn't sound like a problem, but "data on religious affiliation is used for public policy, city planning, community support facilities and more."

In fact, the religious-affiliation question does end up shaping policy and how up to AUS $31 billion in taxes and credits get spent. As in many countries, Australian tax dollars directly go to a wide variety of religious organizations and activities, from education to church-based welfare programs. That's one of the reasons why the Australian Christian League (ACL) is pushing believers to make sure they classify themselves both as religious and Christian:

The ACL has previously reminded members about the importance of ticking the right box on the census form. Governments use [Bureau of Statistics] data to "plan for services and infrastructure" and "we need to prove the size of the constituency who hold these values," the ACL told members in August 2011.

If popular movies about Australia and its near-future are any indication, this will almost certainly end with some sort of apocalyptic showdown in which scattered remanants of a once-near-great country roam the Outback siphoning small amounts of petrol from abandonend cars while attending performances of a suprisingly good draq-queen show and the occasional Midnight Oil reunion tour and sonic-torture session.

So let the coming Jedi-Atheist War be a reminder to the United States of America that we should not only be free from state religion but also state-assisted religion. As Roger Williams, the great religious dissenter who founded Providence, Rhode Island and co-founded the first Baptist congregation in the Britain's New England colonies, used to say, forced worship "stinks in God's nostrils." More on that here.