Is SCOTUS a Good Reason to Support Trump? Libertarian and Conservative Legal Experts Weigh In

What libertarian and conservative legal experts think about Trump. 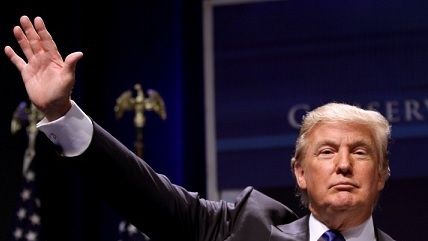 Donald Trump is hoping to pitch himself as the conservative legal movement's last best hope for securing the future of the U.S. Supreme Court. Trump says that if he's elected president he will name committed constitutionalists to the bench and will replace the late Justice Antonin Scalia with "a person of similar views and principles." He insists that non-liberals have "no choice" but to support him in order to prevent Hillary Clinton from packing the Court. Trump has even released a list of potential SCOTUS picks that's chock full of Federalist Society favorites and at least one libertarian legal hero.

But is that reason enough to support Trump in the 2016 election? I wanted to hear what the key players in the libertarian and conservative legal movements had to say about it, so I asked a group of them, including Alan Gura, the ace Second Amendment lawyer who argued and won District of Columbia v. Heller before the Supreme Court in 2008, Randy Barnett, one of the architects behind the 2012 legal challenge to Obamacare in NFIB v. Sebelius, Jonathan Adler, one of the architects behind the 2015 legal challenge to Obamacare in King v. Burwell, and Glenn Reynolds, the respected law professor who runs the popular political blog Instapundit.com. Their opinions range from denouncing Trump as "beyond the pale" to arguing that Trump's judicial appointments "would almost certainly be better" than those of Hillary Clinton. Here are their thoughts on whether the future of the Supreme Court is a good reason to support Donald Trump.

The future of the Supreme Court is of tremendous importance, particularly given the number of likely retirements in the next several years. Concern for the Court, and lower federal courts, is often a good reason to ignore a Republican presidential candidate's other inadequacies. A sound court appointment far outweighs a few silly spending programs. Many say this justifies supporting Trump. Not me. Trump is beyond the pale and there's no guarantee Trump's nominees will be any good anyway.

Despite my lack of confidence in his actually appointing the engaged judges that I would like—rather than judicial restraint judges—I think the Supreme Court may well be the only good reason to support Trump. Whether that reason outweighs all the other negatives is a much tougher judgment. I respect people who have reached either conclusion. And the rest of the campaign has yet to play out, so we don't know the full extent of the variables that will contribute to any such assessment.

Donald Trump has effectively identified the horrific prospect of Hillary Clinton appointing at least one and perhaps several Supreme Court justices, to say nothing of the lower courts. But shall we entrust that task to an insecure lunatic, a fascist caudillo, an autarkist, a proud ignoramous and conspiracy theorist, the aspiring leader of a "Workers' Party" who plays footsie with racists and anti-Semites and might well be a Russian agent? I have no illusions about what Hillary would do to the federal bench. Sad! But there is something deeply contradictory about the notion of electing a power-hungry strongman on the theory that he'll appoint judges that respect and enforce constitutional limits on government. Did Hugo Chavez appoint great judges? Did Putin, Mussolini, or Erdogan? Would it have mattered had they sort-of kinda suggested that they would?

As much as I care about the courts, worrying about jurisprudential doctrine is a luxury for people living under basically free and stable governments, for people who have access to food and toilet paper. And absolutely nothing in Trump's history suggests that he'd honor his proposed judge list or otherwise pick decent judges, while each of his proclamations indicates that the Supreme Court would be among the least of our concerns under his regime. True, the Trump gamble—that he'd be a figurehead who'd delegate authority to responsible people, or be resisted by the bureaucracy and media (or, laughably, by that stiffest-spined creature, the Republican Congress), while hewing to a judicial selection principle anathema to his personal brand—might pay off. Should Trump win, I'd at least delight in Hillary's loss, and fervently hope that he'd prove me wrong on every count. But I wouldn't bet my country on it.

No, it's not a good reason. Judges are important, but the Constitution gives the president much greater powers elsewhere. The president controls the military, sets foreign policy, and controls federal law enforcement. Trump's statements about how he would exercise these executive powers are frightening. He expresses admiration for Vladimir Putin. He advocates war crimes. He wants to use presidential powers to go after his critics. He sees limited government as for the weak and "politically correct." Even if we assume that Trump Supreme Court nominees would be somewhat better than Clinton Supreme Court nominees, the damage that Trump would do to constitutional governance and the rule of law directly through the executive branch greatly outweighs any positive impact on the courts. And I think it's hard to say who Trump would actually nominate to the Supreme Court. He has a list, but there's no reason to think he would follow it.

We know from experience that Hillary Clinton's appointments to the Supreme Court, and to the federal appellate courts, would generally be hostile to constitutional limits on government, including federalism and the separation of powers. That record is clear enough from her husband's appointments. On the whole, her nominations would probably be worse than his, since there is now a powerful Marxist wing of her party which she will need to placate. Although Clinton is a woman of few enduring convictions, one principle to which she had adhered throughout her long public career is implacable enmity to the Second Amendment. She would very likely impose an anti-Second Amendment litmus test for all of her appellate court appointments.

Donald Trump's appointments would almost certainly be better. We would not expect him to devote the same attention to the issue as would a constitutionally minded person, such as Ted Cruz. However, I believe that Trump's nomination for the Scalia vacancy would be drawn from the list of 16 which he has made public. More generally, there is a good chance that he would view judicial appointments as a necessary means of maintaining a good relationship with the significant fraction of the conservative base that does care deeply about the issue. I expect that Senator Jefferson Sessions would exert strong influence on judicial appointments, which would be salutary.

Roger Pilon
Director of Constitutional Studies at the Cato Institute

Assuming Trump were to follow through on his list of possible Supreme Court nominees, that would be a reason to support him, but there are countervailing reasons to oppose him that are, I believe, far more important. The Court will correct itself in time, I hope, but it is the character of the Republican Party and, more broadly and crucially, of our very nation that is at stake in this election. Hillary Clinton is a deeply flawed candidate, to be sure, but the election of Donald Trump would so defile the party of Lincoln and America itself that it must be resisted. He is an aberration that we must get past, and quickly.

Michael B. Rappaport
Director of the Center for the Study of Constitutional Originalism at the University of San Diego School of Law

I certainly believe that the future of the Supreme Court is "a reason" to support Trump. There are no assurances, but I do believe it is likely that he will choose someone from the list he issued previously (or someone similar). Is it strong enough reason to overcome the other reasons not to vote for him?

To me, it depends on one's perspective. If one is simply voting for the candidate whose views are closest to your own, then most libertarians will vote for Gary Johnson. Trump's Supreme Court appointments are unlikely to affect that.

Glenn Reynolds
Beauchamp Brogan Distinguished Professor of Law at the University of Tennessee, Knoxville, and proprietor of Instapundit.com

The future of the Supreme Court under Hillary is clearly dreadful: appointees would be to the left of Ruth Bader Ginsburg and probably corrupt to boot. Under Trump it's unclear: His list of potential appointees actually looked pretty good, but with Trump you never know what he'll actually do. So I'd say it's a choice between certainly awful, and possibly awful.

Timothy Sandefur
Author of The Conscience of the Constitution

There is no basis for believing that Donald Trump will make better picks for the Supreme Court than Hillary Clinton will. While Trump has released what he claims is a list of judges he'd consider for nomination, there's no reason in the world to think he'd actually stick to it. It's a pie-crust promise, easily made, easily broken. Nor does it show that he has any idea what he's doing. One could easily make that list by simply scrolling through the Federalist Society's website for 10 minutes. Trump is ignorant of virtually all of the critical legal disputes of the day, and has no idea which judges are best positioned to resolve those disputes (except that he doesn't want "Mexican" judges). Nor is Trump pro-liberty when it comes to the Supreme Court. He's enthusiastically praised the infamous Kelo eminent domain decision, for instance—a decision the Republican Party once claimed to despise. So no, there's no reason to think Trump will make good judicial picks. And there's also no reason to assume that anyone Clinton would name would be a disaster. Her husband nominated Ginsburg and Breyer, who are certainly not a libertarian's dream, but are highly competent justices and have been on the right side on many important cases. In fact, the best strategy at this point would be to confirm Judge Garland, because he's very likely to be better than anyone that either Trump or Clinton would nominate. In fact, Americans would be better off—as usual—if the White House and Congress were in the hands of different parties, so that nominees would have to clear both hurdles.

Hillary has basically promised to nominate justices who would gut the First and Second Amendments. She would create the most prolonged period of judicial lawlessness since the Warren era.

Trump, on the other hand, continues to reiterate his interest in nominating justices like Scalia and Thomas, and his list of potential nominees was widely praised by conservatives. If there is a non-zero chance that he keeps his promise, it is hard to see how Hillary is a better choice.

Many of the people who will vote in this election were not even born when Justice Kennedy, the swing justice, was appointed. So you're not just voting for a president, you are voting on the trajectory of the Court for the next several decades.