How Would You Detect a War on Cops?

How do you tell a pattern from a phantom? 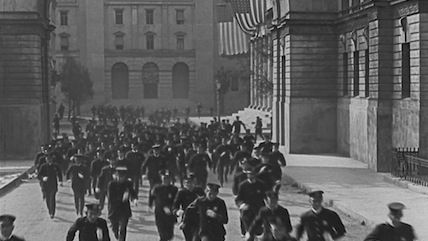 If a war on cops broke out, how would you detect it? Pretty much any cluster of cop-killings can set off the war-on-police alarm; over the last decade, voices ranging from the New York tabloids to Eric Holder have periodically warned that such a war is underway. They've always turned out to be crying wolf, but that doesn't mean a wolf can't eventually show up. So now that the war-on-cops talk is bubbling again, how do you evaluate the evidence?

It's a tricky task, because people who start searching for a pattern tend to start imagining it everywhere. In the wake of the shootings in Dallas and Baton Rouge, just about any act of violence against a police officer can be misconstrued as a political assault. Incidents in Michigan, Maryland, and Kansas were initially mistaken for Dallas-style attacks but then turned out to be something else. The same thing probably happened in Missouri, where someone shot and paralyzed a policeman during a traffic stop; his motive still isn't clear, but given his long criminal history and the fact that the attack doesn't seem to have been preplanned, it's unlikely to be political. And then there are the stories that turn out to be completely untrue. During the Republican National Convention, a rumor circulated that protesters were stabbing cops with syringes. That turned out to be an urban legend, but the authorities banned syringes from the protest area anyway.

Still, it's not every month that you have two ideologically driven ambushes against the police. And there were a couple other incidents in the last few weeks that may turn out to be political too. In Baton Rouge, a group of young people was arrested for allegedly plotting to kill cops. In Tennessee, a man murdered a Days Inn clerk, shot apparently randomly at some cars, and then fired on the officers who arrived at the scene of the crime; the guy just sounds unhinged to me, but the authorities have "preliminarily" suggested that he was angry about police abuses. We'll see.

In the meantime, we can try to compare the recent violence to the risks that cops ordinarily face. But that raises another issue: Just which risks should we be looking at? Much as arguments about how many mass shootings there are keep turning into battles over how you define "mass shootings" in the first place, the meaning of "war on cops" has a habit of shifting around. Here are five different ways of approaching the issue:

1. How common are violent police deaths? My colleague Ed Krayewski tackled this question last week. You should read his post for the details, but the upshot is that fatal police shootings have been more common this year than last year but are still below where they were half a decade ago. That second comparison is important, because the intervening period includes the two safest years on record for American law enforcement. The long-term trend has been for far fewer officers to be killed on the job, and so far 2016 hasn't been out of line with that.

When you make this argument, it usually provokes two responses. The first is that attacks on police might be increasing without the death count going up. Maybe better medical technology is saving more officers' lives; maybe bullet-proof vests have gotten more effective; maybe this generation of cop-haters can't shoot straight. That brings us to approach number two:

2. How common are all assaults on the police, whether or not the victims die? We do not yet have the data for such assaults in 2016. But police assaults per capita have been falling in recent years, just like cop-killings per capita; the two trends don't march in lockstep, but they've been moving in the same direction. So I'll be surprised if this turns out to be far out of line with measurement #1.

Instantly we run into a problem: We don't always know why someone decided to kill a cop. But before we try to figure out a way around that, let's see what happens if we just look at cases where it's clear that something political was going on. Here's a chart that FiveThirtyEight recently ran, drawing mostly on data from the Global Terrorism Database:

The first thing that jumps out about this image is how low these numbers are. Needless to say, any murder is one too many, but when eight deaths are a huge leap you're in the realm where it's easy to find imaginary patterns in statistical noise. This is especially true when you look at the number of incidents rather than the number of fatalities—that makes the last three years a crooked ramble from five to zero to two. (Or seven to zero to two, if you include a couple of cases in the database where the perps didn't manage to kill anyone.) That isn't a surge; it's a zig-zag.

That long gap without any deaths also raises the question of how we're defining "attacks targeting the police." The database, for example, leaves out the much-discussed 2010 clash where a pair of sovereign citizens shot two cops during a traffic stop in Arkansas. This is presumably because those shooters were reacting in the spur of the moment rather than setting out to shoot someone. (To be included in the Global Terrorism Database, a killing must be "intended to deliver a message to people other than its victims.") I'm guessing that the database will also leave out an incident this year that FiveThirtyEight doesn't mention, in which an officer was shot while trying to evict an Occupy Denver activist who had been refusing to pay his mortgage for political reasons. ("If you give criminals money and you know they are committing crimes," he argued, "you are an accomplice to those crimes.") These exclusions may make sense if you're looking for people specifically targeting the police, but they show how difficult this issue of definitions can be.

But the big problem, again, is that we often don't know why someone decided to kill an officer. If you only look at shooters who announce their motives, you might miss something. And so, as a proxy, people often focus on cops who were killed in ambushes or shot execution-style—methods that suggest a shooter set out to kill a cop.

4. How many police officers are killed in ambushes or shot execution-style? This, of course, leads to the opposite problem, since some of these slayings will be apolitical. When Sgt. Miguel Perez-Rios was murdered in an ambush in Puerto Rico late last year, for example, the motive was probably revenge for past arrests. This isn't unusual: According to a report from the International Association of Chiefs of Police, looking at both fatal and nonfatal American ambushes from 1990 to 2012, about one in four of the assailants "have some sort of prior relationship with the officer." Clearly, there will be a lot of false positives here.

But all measurements are imperfect. What does this one show?

Basically, it's not all that different from the last measurement. As of July 20, according to the National Law Enforcement Officers Memorial Fund, 14 police have been killed in ambushes; at the same point last year, the figure was three. That's a big leap in the number of victims, but not in the number of actual incidents—remember, one man acting alone killed five officers in Dallas, and another man killed three in Baton Rouge. So what we're seeing isn't a substantial increase in fatal ambushes; it's a couple of shooters who were more lethally effective than the average cop-killer. (That may reflect the fact that both were veterans, and thus had military training.)

That leaves one last approach:

Here I have to give you an unsatisfying answer: I don't know. The FBI posts annual statistics for the number of law enforcement officers killed and assaulted in the line of duty, and that includes a breakdown of how the assaults happened. But right now its assault data only goes as far as 2014. For the record, the number of assaults the FBI classified as "ambush situations" was 167 in 2014, 234 in 2013, 267 in 2012, 212 in 2011, and 248 in 2010. In the longer term, the annual number of ambushes—total, not per capita—dropped dramatically in the early to mid 1990s and has been hovering around the same rough range for the last two decades.

So where does that leave us? Back where we started: with a mass shooting in Dallas, a possible copycat crime in Baton Rouge, a couple of ambiguous cases, and a big fearful fog that has people spotting phantom patterns in the police blotter. A fog, but not necessarily a fog of war.