Friday A/V Club: What We Left at the World's Fair

John Crowley and Jason Robards look back at a festival of social planning. 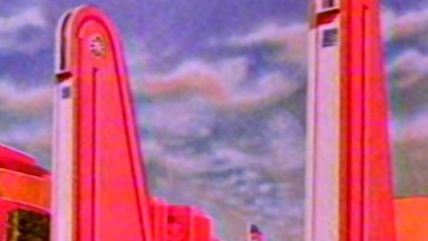 The world's fairs of the 20th century, Virginia Postrel once wrote, "encouraged visitors to equate progress and technological optimism with the Galbraithian vision of stable, heavily bureaucratic, industrial quasi-monopolies—the corporate version of nation states—working with government to determine the future." The World of Tomorrow, a made-for-TV documentary from 1984, looks back at the most famous of those fairs with a perspective that mixes nostalgia for that vision with an awareness that it didn't really pan out.

Written by the novelist John Crowley, of Little, Big and Ægypt fame, the film explores the 1939 fair, a festival that had room both for Westinghouse and for Stalin; it links the fair both to the era's passion for central planning and to the emerging world of corporate consumerism. The narrator, Jason Robards, adopts the persona of a man who visited the fair as a 10-year-old boy (I assume this figure is fictional, since that's too old to be Crowley and too young to be Robards); onscreen we see footage culled from home movies, newsreels, industrial films, and other artifacts of the age. The program's ambiguous tone allows the audience to draw its own conclusions—I imagine the film's fans include libertarians who dislike those centralized visions, technocrats who admire them, and socialists dismayed at the gradual transit from the social planning of the '30s to the consumer republic that followed.

Here's the first segment of the documentary:

(For past editions of the Friday A/V Club, go here. For a Crowley novel with anti-centralist, anti-technocratic themes, go here.)