Zachary Quinto and Chris Pine take the Enterprise out for yet another spin. 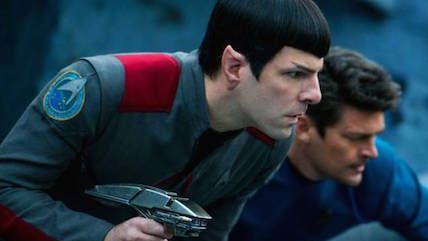 For a movie that's reckoned to have cost about $150-million to make, Star Trek Beyond is unusually affectionate in referencing the 1960s TV show from which it's descended. Here we have the crew of the USS Enterprise, stranded on a hostile planet, clambering around among fake boulders apparently mined from the same Styrofoam quarry of yore; and in at least one scene, there's a background vista that seems to have been simply painted in (although no doubt digitally). Along with all the traditional rubbery aliens on view, these retro touches signal a sweet regard for the generations of fans who continue to revere the original, ultra-low-budget series.

Also true to the vision of Star Trek's creator, the late Gene Roddenberry, the story in this third installment of the rebooted franchise is at times more-than-usually contemplative. Captain Kirk (Chris Pine, a little less bland than usual) is feeling burned out in his job commanding the USS Enterprise. He wants to switch to an administrative position, possibly in the Federation space base of Yorktown—a snow globe of a city gleaming among the stars. (It recalls the futuristic metropolis of the 1936 Things to Come.) Kirk wants to turn over his control-room captain's throne to his first officer, Spock (Zachary Quinto, perfect once again). But Spock is restless, too: having just broken up with his girlfriend, Lieutenant Uhura (Zoe Saldana), he wants to leave the Federation to help reconstitute his home planet of Vulcan, which was destroyed in one of the earlier films. Meanwhile, in a less mopey development, the helmsman Sulu (John Cho) is revealed to be happily gay (although a scene in which he was shown kissing his partner was reportedly deleted in order not to risk disturbing PG-13 sensibilities).

The story is naturally generic. Responding to an interstellar distress call, the Enterprise sets off for a dense nebula where Kirk and crew discover they have been tricked by a growly alien called Krall (Idris Elba, unrecognizable beneath an impasto of prosthetic makeup). After an extended shipboard battle, Kirk and his crew find themselves marooned on Krall's dark and unwelcoming native orb, where they're separated and stalked by Krall's forces in an effort to retrieve an "artifact"—a sort of space MacGuffin—of which Kirk and company are in possession. And so forth.

The best parts of the movie deftly illuminate the characters' personalities, especially those of the hyper-rational Spock and the grittier ship's doctor Bones (Karl Urban). Awakened from what appears to be a nap, Spock says, "I was simply contemplating the nature of mortality." Says Bones: "Fear of death is what keeps us alive."

Also off on their own are Kirk and his security officer, Chekov (Anton Yelchin); Sulu and Uhura, who eventually fall into Krall's hands; and beam-up master Scotty (Simon Pegg, who also co-wrote the movie's script). Slogging through the rocky wastes, Scotty comes upon a young alien woman named Jaylah (Sofia Boutella, the blade-legged ninja girl of Kingsman: The Secret Service). She's hiding from Krall in an old, disabled spacecraft, where she passes the time blasting vintage Public Enemy and Beastie Boys tracks on an ancient boombox. These two are a cute semi-couple.

As charming as all of this interpersonal business is, the bulk of the movie is given over to swooping, explosive action. Justin Lin, stepping in for original reboot director J.J. Abrams, made his bang-boom bones in the Fast & Furious franchise, and he's a master of mayhem choreography. But the relentless overload of CGI that he brings to bear on the proceedings, while dazzling at first, grows tedious after awhile, and then, at times, exhaustingly incoherent. There's also a puzzling swarm of space bees putting in several appearances, and a roaring motorcycle sequence that seems to have been beamed in from another planet. And it's too bad that some of the actors are wasted (inevitable, perhaps, given the size of the cast). Yelchin, in one of his final performances before his death last month, is given little to do; and Elba—an actor of magisterial presence—struggles unsuccessfully (until the very end) to break out of his prosthetic prison.

Although it's a mid-range, almost TV-like entry in the series, this movie should be warmly received by Star Trek fans worldwide. It's more than just another big-ticket blockbuster—it has a heart. But beneath the incessant digital uproar, we can sometimes barely hear it beating.