"Why do Republicans Respect Marijuana Prohibition Like it Came From Moses?"

Republicans Against Marijuana Prohibition take on the RNC. 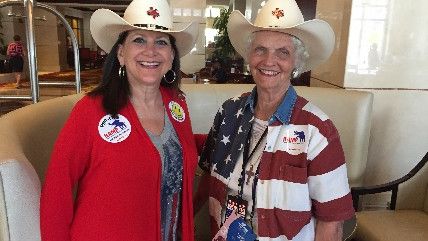 "Bad law needs to be dealt with, we don't need to follow it blindly," says 86-year-old Ann Lee, the founder and executive director of Republicans Against Marijuana Prohibition (RAMP). In an interview with Reason at a Cleveland hotel near the Republican National Convention (RNC), Lee adds, "The mystery to me is why Republicans respect this law like it came from Moses, and when you read how it came about in 1937 under FDR…why Republicans support that is beyond me."

Lee is a staunch pro-life social conservative who had her come-to-Jesus moment in when it came to marijuana prohibition after her son suffered a devastating accident in 1990. While recovering, he told his mother that unlike synthetic painkillers and other drugs, marijuana actually provided him physical relief. Lee, who grew up in Jim Crow-era Louisiana, says she grew up living under bad racist laws that needed to be changed. She argues that drug prohibition is the modern-day version of Jim Crow and also needs to be changed.

RAMP's treasurer Bonnie Lugo tells Reason that she was also a staunch drug warrior until she met Lee while running against her for a spot on Texas's Republican Executive Committee. Lugo's first impression of Lee was that "she was this crazy lady" advocating for drug legalization but that the "tenacious" Lee ultimately convinced her to do her own research on the subject. When Lugo learned about how much safer marijuana is than alcohol or cigarettes, combined with the fact that people's lives were being ruined in myriad ways because of its criminalization, she did a 180 on the issue. Lugo says, "Once you figure out that your government has lied to you, it's easy to figure out all the rest."

In trying to sell marijuana legalization to fellow RNC attendees—who are very much of pushing a "law and order" agenda this week—Lee says she is trying to convince her party cohort that they can be for law and order but need to "remember laws can be bad, too."

When asked if RAMP has any plans to advocate for the legalization of drugs other than marijuana, Lee says, "this is all I can say grace over. I can't handle anything else. But I know this issue."