You're either with him or one of the bad guys 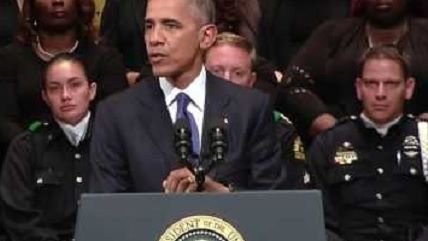 At the funeral service for five slain Dallas cops, President Barack Obama delivered another one of his needlessly politicized lectures. As is customary these days, those who were critical of his rhetoric were branded racists and unthinking haters.

Another one is that people may be put off by Obama's grating habit of turning every tragedy into a sermon about our supposed collective failings. I doubt the president is substantively more partisan than the average politician, but like most people on the left these days, he no longer bothers to make a distinction between a policy position and a moral struggle.

The issue of gun control, for example, is not a good-faith disagreement among people of different persuasions but—like civil rights or suffrage—a struggle waged by the righteous against the evil (and sometimes those poor souls tricked by the National Rifle Association).

Seemingly every political battle waged by the modern Democratic Party—gay rights, immigration, climate change, inequality—is imbued with a kind of spiritual certitude that justifies circumventing debate. If a person who opposes the Obama administration's transgender bathroom policy is just like a Klansman, why even discuss the matter? In this context, the histrionics of Democrats in Congress over guns or the media's melodramas make all the sense in the world.

In this context, why wouldn't the president lecture us about gun control in his eulogy? Why wouldn't Obama offer completely unsubstantiated claims about guns? "It is easier for a teenager to buy a Glock than get his hands on a computer or even a book," was a contention Obama made that no rational person could ever possibly believe. It's meant to convey the idea that half the nation cares more about the NRA than about children.

So maybe some conservatives are put off by Obama's awe-inspiring propensity to create straw men and offer false choices at every opportunity—all under the guise of thoughtful discourse. Maybe it's that he never offers a fair or reasonable assessment of his opposition's positions before pretending to debunk them. Or maybe it's that no matter what actually happens, he clings to a predetermined message before blaming the half of America that didn't vote for him.

Last week, the Dallas chief of police told us that the murderer of five cops, Micah Xavier Johnson, was "upset about the recent police shootings" and "wanted to kill white people, especially white officers." In the same way, the Orlando shooter, Omar Mateen, was a Muslim motivated by the Islamic State group to murder as many gay Americans as he could. Because neither of those storylines comports with the president's worldview, in each instance, he laid down collective responsibility and implored us to be more liberal and thus avoid more incidents like them.

We are better than this, he says.

We are. When speaking about Johnson, Obama claimed that "none of us is entirely innocent" when it comes to racial discrimination—"and that includes our police departments." Actually, most cops and most people are entirely innocent when it comes to racial discrimination. Yes, there are racists and bigots in all our institutions and communities, but most Americans don't need to "open our hearts" on the subject simply because liberals accuse them of harboring ugly thoughts. We need to fix police departments. We need to fix our inner-city schools. And we need to fix the economic prospects of minority populations. People have different ideas for how to go about it. Every day, though, the vast majority of citizens peacefully interact in families, in friendships and in commerce.

If you continually claim that every problem in America is driven by hate, people may start believing you. According to a new Pew Research Center poll, Americans' perception of race relations is more negative today than it has been in 20 years. About 48 percent of those polled claim that "race relations are generally bad." And 36 percent of adults say that "too much attention" is paid to race and racial issues today. Are things really worse today than they were 30 years ago? Fifty years?

When Obama calls for unity (you'll recall this was a big part of his first campaign), he's not talking about a nation that maximizes its freedom so that there is space for an array of cultural outlooks and ideas. He means a nation of diverse people who can all agree that progressivism is right for the nation.

Meanwhile, this administration has made a habit of using the power of the state to coerce and compel others to accept its cultural attitudes. For him, unity means little dissent. In his last State of the Union address, for example, Obama laid out a progressive agenda and then implored us to embrace "American ideals" as if they were the same. Obviously, the nation is divided because Americans have deep-seated, legitimate and meaningful disagreements about the future. One man can neither unify us nor break us apart on his own. But it's been a long time since we've had a president as divisive as Barack Obama.