Libertarians on Clinton Email: The Party Condemns, the Candidate Declines

Prior to FBI Director Comey's statements, Gary Johnson did not want to be a "stone thrower" when it comes to Clinton and her email issues. Some Libertarians are peeved at a missed opportunity. 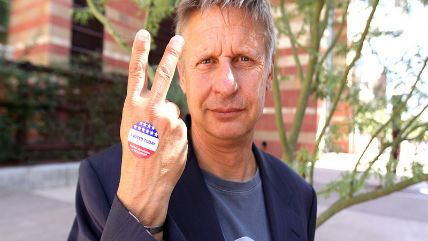 After FBI Director James Comey announced yesterday, more or less, that Hillary Clinton likely broke the law but wasn't going to be prosecuted for it, the Libertarian Party issued a press release condemning the lack of any potential legal punishment for Clinton.

Nicholas Sarwark, chair of the Libertarian National Committee, was quoted:

"This is a serious miscarriage of justice," says Nicholas Sarwark, chair of the Libertarian National Committee. "One key criteria for laws to be just is that they must be applied equally to all." Countless other people who have served in roles handling classified information have been prosecuted, fined, and jailed for far lesser breaches of protocol and security.

I asked the Johnson campaign for a comment yesterday given the latest. "As this unfolded the Govs have been traveling and we don't have a statement," was a response sent overnight from the campaign's press office.

The most recent detailed comment on Clinton and her email troubles from Johnson I found were on CNN and were quoted in the Washington Examiner on July 3:

Johnson and Weld were already being written off by many Libertarians as overly solicitous to Clinton, who they are, it should be remembered, running against. One might expect them to at least occasionally take the time to critique when appropriate.

Asked about Clinton on their CNN Town Hall appearance in June, Johnson praised her as a "wonderful public servant" and vice presidential candidate William Weld truthfully referred to her as an "old friend."

Johnson's manifest unwillingness to play what he might see as a right-wing gotcha game against Clinton almost certainly comes from a sincere place where policy is more important than a process scandal. He may perhaps be a staunch defender of mens rea and think, even after Comey's statements, that a prosecution is unjust.

Whatever the case may be, a campaign currently running nearly entirely on free earned media should consider taking advantage of news cycles to his benefit and to remember that on all sides he is trying to appeal to—disaffected Democrats or progressives who preferred Sanders, or Republicans who can't abide Trump—there is much to gain and little to lose in being willing to point out political or personal flaws in his competitors, whether or not he sincerely believes she should face jail time for it. Even if it is merely using that news hook to point out where he thinks Clinton does deserve censure or criticism.

The Green Party's Jill Stein quickly condemned Clinton in the aftermath of the Comey announcement, openly calling for Clinton's prosecution, saying "All the elements necessary to prove a felony violation were found by the FBI investigation."

I've seen a whole lot of annoyance and anger coming Johnson's way over his lack of interest in condemning Hillary Clinton over this, particularly among fans of Austin Petersen, who came in second to Johnson in the Party's nomination process.

Petersen released a video dinging Johnson for his previous comments above about Clinton's email. And he contrasts it with his willingness to call Trump a racist on CNN.

"Unless you are just a Gary Johnson sycophant, you won't be a big fan" of how Johnson has dealt with this issue, Petersen said. "Even the FBI said she was grossly negligent…it is a crime, so it doesn't make any sense from a political standpoint to defend Hillary Clinton unless there is some weird ulterior motive." Petersen notes that Weld is a very old friend of Clinton's, and goes on to condemn what he sees as an overly "social justice warrior" vibe to Johnson's "effete liberalism" and calls his defense of Clinton "egregious."