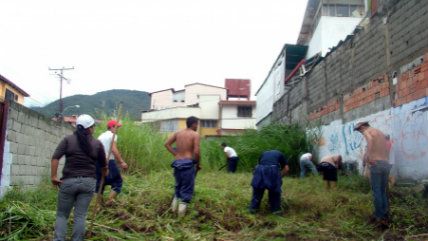 In once-industrial American areas like Brooklyn and Detroit, the abundance of abandoned warehouse rooftops and eager, earnest hipsters has led to an array of urban-farming experiments over the past decade. But while some such projects are designed to feed poor residents, city agriculture in the U.S. is still mainly a boutique affair. In hunger-wracked Venezuela, however, the government hopes to rely on urban farms to make up 20 percent of the socialist nation's food supply by 2019.

In February, the country launched a Ministry of Urban Farming, tasked with encouraging more home and community gardening and chicken-keeping. Its head, Lorena Freitez, said the push will help bring "food sovereignty" to Venezuelan cities, where both local food production and food imports are down and social unrest is increasing.

"Now, amid the narrow roads and crumbling shacks of one of South America's largest slums, a careful look yields something unexpected: a carefully tended tomato plant and a bush of basil leaves," the Associated Press reports. "Francisco Salazar, head of a community council that works in Caracas slums, says he and his neighbors are growing beets, black beans, lettuce and dozens of other vegetables in a large community garden."

Call it locavorism or call it self-sufficiency, but community-based agriculture can't be anything but a win for impoverished communities. In America, many places are still grappling with zoning laws and building codes that prevent such projects from launching. Of course, with Venezuela, any growth in such activities is tempered by the fact that it's government polices putting people in poverty and creating food shortages in the first place.

Stephen Devereux, a development economist from the University of Sussex, told ResearchGate that "what is happening [in Venezuela] is strikingly similar to what happened to countries like North Korea, which had a severe famine in the 90s, because the government intervened too much in the economy. "There is a serious food crisis in Venezuela, because the government interfered in agricultural production and trade, and they are rationing electricity and water." The electricity rationing, which begun in April, was ended on July 4.

Hungry mobs have taken to attacking and looting supermarkets and food-delivery trucks. Meanwhile, peaceful protests and looters alike are met with repression by the country's National Guard. "What has been a slow-motion crisis in Venezuela seems to be careening into a new, more dangerous phase.," The Washington Post warns.

Over the first five months of this year, Venezuelans have violently looted businesses — or tried to do so — at least 254 times, according to the Venezuelan Observatory of Social Conflict. The number of protests over food has risen each month this year, to 172 in May. Several people have died and hundreds more have been arrested in incidents of unrest across the country.

Home and community gardens can't hurt, but as community-leader Salazar told AP, they're but a "Band-Aid" on a much bigger wound. Besides producing an insufficient quantity of food, it's hard to imagine urban-home gardens and community farm cooperatives avoiding the problems that plague Venezuelan grocery stores: the presence of desperate, hungry people and corrupt and meddling state officials.

As socialist policies put poor Venezuelans in more misery and food distributors in danger, capitalism and technology are helping keep Venezuela's middle- and upper-classes stocked with food. Residents told the Post they had been shopping on Amazon for staples such as powdered milk, sugar, and bread, items that were then shipped from Miami. Among those waiting in government food lines, meanwhile, a more localized form of entrepreneurship has emerged, with vendors selling black-market cigarettes and lemonade from old shopping carts.