The Political Class Knew California High-Speed Rail Was B.S., and Supported it Anyway 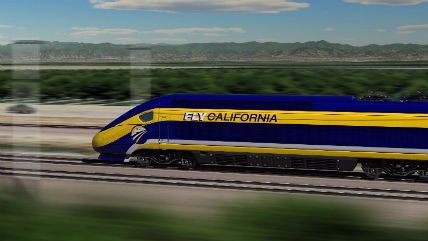 Former Reason editor and current Bloomberg View columnist Virginia Postrel has a terrific new column laying out in damning detail the latest revelations in California's high-speed rail boondoggle. The Los Angeles Times, Postrel notes, published an investigative piece earlier this month showing that (in her paraphrasing), "When the Spanish construction company Ferrovial submitted its winning bid for a 22-mile segment, the proposal included a clear and inconvenient warning: 'More than likely, the California high speed rail will require large government subsidies for years to come.'" Worse yet—the state scrubbed that we're-gonna-need-a-bigger-subsidy warning from the project's website, almost certainly because the California High-Speed Rail Authority is heavily invested in the provable fiction that (in its own shouty words), "HIGH-SPEED RAIL IN CALIFORNIA WILL NOT REQUIRE OPERATING SUBSIDIES."

That thievery-level mendacity of the vested pro-rail interests within government, you can be sure, will not be the target of suggested fraud prosecutions in the Democratic Party's national platform. (Indeed, if they were being even-handed about suggesting law enforcement crackdowns against intentionally misleading forward statements, Democrats would be investigating why their own "five million green jobs" stubbornly failed to materialize.)

But California's broader political class also has blood on its hands, as this Postrel passage illustrates:

[A] closer look even back [in 2008] would have made it clear that, barring a miracle, the rail project wouldn't keep its promises. To do so, it would have to be the fastest, most popular bullet train in the world, with many more riders per mile and a much greater percentage of seats occupied than the French and Japanese systems—a highly unlikely prospect. Yet only the most determined wonk would have discovered these comparisons.

Some of those who knew better still succumbed to the glamour of the idea. "There's something undeniably alluring about a bullet train—the technology is so powerful, the speed so breathtaking, it makes quotidian trips seem exotic," opined the Times's editorial board in October 2008. Admitting that "it seems close to a lead-pipe cinch that the California High-Speed Rail Authority will ask for many billions more in the coming decades, and the Legislature will have to scrape up many millions of dollars in operating subsidies," it nonetheless concluded that "we still think voters should give in to the measure's gleaming promise."

The two hyperlinks in that excerpt are, respectively, to my current employer and my former employer. In fact, the L.A. Times editorial in question linked back to the Reason Foundation's study, and pronounced it "more persuasive" than that of rail project's backers. Here's a longer passage:

[P]roponents of Proposition 1a, which would authorize $9.95 billion in bonds for a high-speed rail line connecting Northern and Southern California, think it would be wildly successful. They predict the line could draw 117 million riders a year by 2030, compared with 3 million now taking the high-speed Amtrak train in the densely populated Boston-Washington corridor. And they say it will turn a billion-dollar profit by then even as it keeps ticket prices remarkably low.

The projections by the measure's opponents, led by the libertarian Reason Foundation in Los Angeles, are much less sanguine and more persuasive.

In other words, screw cost-benefit analysis; we like shiny trains! (And we dislike consumers making the same yucky choices as most members of the L.A. Times editorial board: "Weaning travelers from gas-powered, road-choking cars is critical to the state's health and competitiveness.")

Three years later—I kid you not—the L.A. Times reacted to the cost overruns we predicted by editorializing that "Yes, the price tag has tripled and its completion date is 13 years later. But it's still a gamble worth taking." One almost hopes they continue finding enough shovels over on Spring Street, for the pure physical challenge of it all.

I think about this mindset every time libertarians are accused of being pie-in-the-sky-dreamers who don't understand how the real world works, or conversely when the same mainstream outlets who editorialize for nearly every imaginable bond issue then turn around bemoan how state budgets have been cut to the bone.

To paraphrase Vietnam-era John Kerry, who will be the last California taxpayer to bleed for what people knew at the time was going to be a massive waste of money? And when will the people who should have known better own up to their own embarrassing intellectual mistakes? It must suck being beat to the policy punch by Season Two of True Detective.

Reason TV has been all over this sorry story, including this piece from last year: