U.S. Can't Be Responsible for ISIS in Syria Because There Wasn't an 'Intervention,' Says Vox

Blind spots big enough to get rebels through. 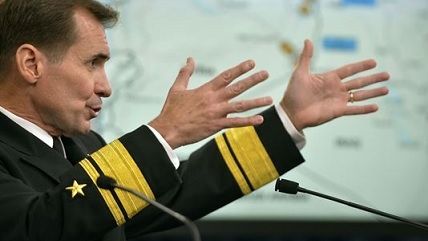 In its explainer about Donald Trump's recent foreign policy speech, Vox.com attempted to show just how inaccurate Trump was in the 150 word segment of the speech where he criticized the U.S. and Hillary Clinton for the intervention in Libya, pointed out that the push for U.S. intervention in Syria helped destabilize that regime, and noted that NATO needed to change its mission to support counterterrorism.

Vox.com's Matthew Yglesias insists the short portion of the speech has a "remarkable amount" that's wrong. But his list mostly amounts not to inaccuracies but inconsistencies between what Trump said yesterday and what he's said in the past about those issues. Two of the points made by Yglesias are worth highlighting for how they illustrate a blind spot in the left to its own establishment foreign policy.

First, Yglesias argues that the "collapse of the Syrian state can't be the fault of a US intervention to overthrow Assad, because we never mounted any such intervention." But that's not what Trump said. Trump argued that "pushing for the overthrow of the regime in Syria, among other things, without plans for the day after, have created space for ISIS to expand and grow." This is true.

The U.S. has been supporting so-called "moderate" rebels since near the beginning of the conflict. The U.S. has sent weapons and other military gear to those rebels, which has sometimes ended up in the hands of other warring factions, up to and including ISIS. At one point, CIA-backed rebels were fighting Pentagon-backed rebels. Of course this creates space for ISIS to grow. I can't see how denying it does anything other than re-inforce the narratives Trump is using to build support for his campaign.

Later, Yglesias argued that "Trump's habit of insisting that every US military alliance—from NATO to our defense treaties with Japan and South Korea—should be scrutinized in narrow financial terms is the exact opposite of replicating the Cold War strategy to unite the civilized world." But Trump did not talk about his aspirations for a more transactional foreign policy in the short foreign policy segment Yglesias argues is full of misinformation (but actually just full of more pedestrian flip-flopping). Instead, Trump argued in yesterday's speech that "NATO needs to change its focus to stopping terrorism" and took credit for NATO doing just that.