Of course, the claim relies on refusing to draw distinctions between violence, coercion, and persuasion. 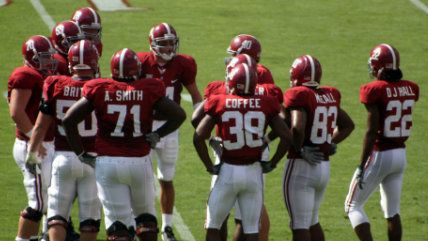 "Half of male college athletes admit history of 'sexually coercive behavior such as sexual assault, rape," Medical Daily reported. The article refers to a new study published in the journal Violence Against Women, which compares "sexual coercion practices among undergraduate male" students who participate in recreational athletics, intercollegiate athletics, or no college athletics programs.

"Prior research shows that male intercollegiate athletes are at risk for perpetrating sexual violence," write the researchers, lead by Centers for Disease Control and Prevention Fellow Belinda Rose-Young, in the study abstract. "Our analyses showed significant differences between the responses of athletes and non-athletes for all dependent variables, and intercollegiate and recreational athletes on attitudes toward women and the prevalence of sexual coercion."

Of the 379 respondents, all male undergrads, 191 were non-athletes, 29 played intercollegiate sports, and 159 were what the researchers termed "recreational" athletes. "We found that 54.3 percent of the intercollegiate and recreational athletes and 37.9 percent of non-athletes had engaged in sexually coercive behaviors – almost all of which met the legal definition of rape," study author Sarah Desmarais said. But its unclear what definition of rape she's talking about—certainly not the one prevalent throughout America. As far as I'm aware, no state defines "rape" as mere "insistence" that a hesitant partner have sex.

If we assume overlap among athletes in these categories, we're looking at around 9.5 percent who report using some sort of force or threats to obtain sexual activity. Even if we assume all those who used threats are different than those who used force, and so on—which seems highly unlikely—we arrive at a maximum of around 37 percent of student athletes who admit to the legal definition of rape or sexual assault, not 54 percent.

I wouldn't say these results are exactly encouraging. But they also don't show that almost half of all college athletes are rapists, as quite a few media outlets reported. It's also important to note that all respondents came from one school, an unnamed public university in the southeastern U.S., and only 29 played on the school's official sports teams.

"We don't know how representative these findings are," Desmarais told Medical Daily. "The reality is that we are limited to a sample that self-selected to participate in the study and were willing to disclose this information."

The majority of respondents who reported engaging in some form of sexual coercion say it did not involve the use of force or threats. It's unclear from the wording of the survey questions what exactly coercion means in this context; researchers simply asked whether students had ever "insisted on sex" when a partner "did not want to (but did not use physical force)"—a category that could include simply trying to talk or nag a reticent partner into getting it on. To this vague question, 111 respondents—including 60 athletes—replied yes; 101 respondents said the same for oral or anal sex. In addition, a total of 108 students (including 74 athletes) responded yes when asked if they have ever "made" a partner "have sex without a condom" without using force.