Who Wants To Be Secretary of the Future?

Ronald Bailey | From the June 2016 issue 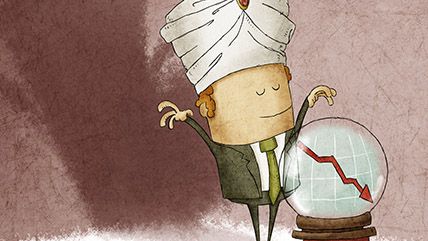 Well, it would be a disaster. Human beings are terrible at foresight, and marrying our purblind premonitions to government power would be more terrible still.

Vonnegut was far from alone in pining for some sort of far-seeing federal planner. For the past half-century, the chief motive for establishing planning bureaucracies has been an allegedly impending ecological and economic catastrophe. For example, in the 1968 book The Population Bomb, the Stanford biologist Paul Ehrlich proposed a new Bureau of Population and Environment. The tasks of this "powerful governmental agency," he wrote, would include determining "the optimum population size of the United States and devis[ing] measures to establish it." One such measure would be research on sex determination, so as to guarantee that first-born children were always male, thus satisfying the cultural demand for male heirs.

Ehrlich doubled down in Ark II: Social Response to Environmental Imperatives, a 1974 book that called for a Federal Planning Branch. He and his co-author proposed headquartering the new agency "not in the nation's capital but in some relatively pleasant location that would induce talented young people to choose careers in public service." The planning board would, as Kirkus Reviews noted, be "composed of enlightened fellows" like Ehrlich. Its overall goal: to "curb individual appetites" and persuade the population to adopt "the lost tribalism of preindustrial society."

Two years later, in The Genesis Strategy: Climate and Global Survival, climatologist Stephen Schneider and his co-author advocated the creation of a "Truth and Consequences Branch," a fourth branch of government whose members would be appointed for 20-year terms. The Truth and Consequences Branch would work with the Institute of Imminent Disasters, founded to "assess the probable costs of avoiding any and all perceived disasters impending." The fourth branch would also engage in propaganda, pushing the public to "question present value systems and adopt a new political consciousness. Such a consciousness would move us away from narrow and immediate economic-interest policies and redirect our efforts and resources toward the creation of a stable equilibrium world order."

The fraught 1970s were capped off with two ominous federal exercises in crystal-ball gazing: The Global 2000 Report to the President commissioned by President Jimmy Carter, and the National Academy of Sciences' Energy In Transition: 1985–2010.

In 1977, Carter directed the Council on Environmental Quality, the State Department, and 11 other federal agencies to analyze "probable changes in the world's population, natural resources, and environment through the end of the century." He added, "This study will serve as the foundation of our longer-term planning."

So what did the Global 2000 Report prognosticate? Newsweek's stark summary: "The time: the year 2000. The place: Earth, a desolate planet slowly dying of its own accumulating follies. Half the forests are gone; sand dunes spread where fertile farm lands once lay. Nearly 2 million species of plants, bird, insects and animals have vanished. Yet man is propagating so fast that his cities have grown as large as his nations of a century before. The bleak scenario is not science fiction, but a detailed look at the real world's future."

Global 2000 did get straight-line demographic and economic projections about world population and economic growth nearly right, but missed widely on resource and energy availability and global ecological trends. For example, the report predicted that real food prices in 2000 would be 95 percent higher than they were in 1970. In fact, according to the Food and Agriculture Organization, world food prices were almost 40 percent lower.

"Engineering and geological considerations suggest that world petroleum production will peak before the end of the century," the report declared. Americans also were expected to increase their per capita energy use by 48 percent between 1980 and 2000. Instead, Americans were using essentially the same amount of energy per capita in 2000 as they were in 1980, and in fact, per capita energy use has fallen by 9 percent since 2000. The report's medium scenario projected that in 1995 (the models didn't go further) the price of oil would be around $95 per barrel (in 1979 dollars); instead the inflation-adjusted figure averaged around $8 per barrel.

By 2000, it said, "40 percent of the forests still remaining in the [less developed countries] in 1978 will have been razed." Using data from a 2008 review article in the Proceedings of the National Academy of Sciences, tropical forest cover declined in the worst case by 10 percent between 1980 and 2000. The Food and Agriculture Organization has noted that the global deforestation rate has been cut in half since 1990 and may soon reverse. And contrary to the report's prophecies, 2 million species did not go extinct between 1980 and 2000.

In 1980, the National Academy of Sciences' Energy In Transition: 1985 to 2010 tried more modestly to estimate how much and what type of energy Americans would be using over the next 25 years. In the middle-of-the-road scenario, the report predicted Americans would be using 150 quads of energy by 2010. (A quad is a quadrillion British thermal units—the amount of energy in 45 million tons of coal, or 170 million barrels of crude oil.) The analysts projected that energy consumption in 2010 would include 50 quads from coal, 41 quads from nuclear, and 11 quads from solar energy.

Instead, Americans in 2010 were using about 96 quads total, of which coal accounted for 22 quads, 8 quads came from nuclear, and just 1.5 quads were derived from renewables like wind and solar power. In other words, the middle-of-the-road scenario was off by 50 percent. U.S. energy consumption in 2012 (the latest figures we have) was still around 96 quads.

What if the U.S. government had heeded Ehrlich's warnings about overpopulation and impending famine? For an inkling of how this might have played out, check out the biologist's 1978 update of The Population Bomb, which praised China's incipient one-child population control program as "remarkably successful."

Or consider the Carter administration's response to the "energy crisis." In 1980, at the president's behest, Congress created the Synfuels Corporation, endowing it with $20 billion with the goal of eventually building as many as 22 enormous coal gasification plants, each producing 300 million cubic feet of synthetic natural gas per day.

Why rehash these predictive failures? Clearly, people are always trying to discern the future so as to make good decisions in the here and now. Private companies invest a good bit in trying to figure out future economic, social, and technological trends. Surely there's nothing innately wrong with that.

But if a private company gets its forecasts wrong, the worst that happens is that it goes out of business and is replaced by competitors who made better calls. Markets are superb at marshaling vast quantities of information, and they amply reward foresight and good guesses.

The problem with government planning is government power. A Secretary of the Future would rely on dubious models to issue orders on how many children citizens may have or how much energy they may use. Given ineluctable human fallibility, the best thing we can do is to let our children and grandchildren make their own plans for the future.