If you want to learn economics from a TV cartoon, you're better off watching South Park. 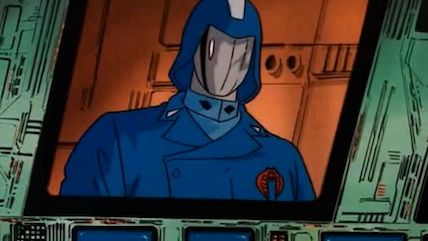 That time Cobra Commander decided to combine terrorism with deflation:

That's from a 1985 G.I. Joe episode called "Money to Burn." The villain's plan is foiled when everyone ignores his offer, realizing that they're better off holding onto their valuables, bartering for their immediate needs, and allowing a new medium of exchange to emerg—

Just kidding! It's foiled when the government blows stuff up. For those of you who'd like to experience the full episode, in all its ideologically rich glory, it's embedded below: