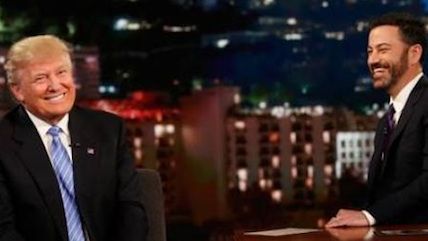 Hillary Clinton has refused to meet Bernie Sanders for another debate before the California primary. So on Jimmy Kimmel Live tonight, Kimmel asked Donald Trump if he'd be willing to debate Sanders instead. Trump said he would, and Sanders promptly tweeted this:

Game on. I look forward to debating Donald Trump in California before the June 7 primary.

This is, of course, a brilliant idea, and not just because Trump/Sanders will be an innately interesting combination. Why shouldn't candidates from opposing parties debate each other before the nominations wrap up? All year I've been hearing people say, "Just think how [Candidate X] would mop the floor with [Candidate Y] in the debates!" Well, now we needn't imagine it: We may actually get to see such a match-up. I only wish we'd also had a chance to watch a Clinton/Paul debate, or a Webb/Rubio debate, or—dare I imagine it?—the Biden/Trump face-off that every political journalist was fantasizing about last summer.