Officials claim that more than 1,000 Ohio children are "trafficked into the sex trade each year." Here's why they're wrong. 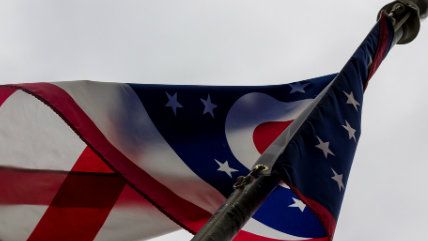 Every year some 1,000 new children are trafficked for sex in Ohio, while an additional 3,000 remain "at risk" of being trafficked, according to U.S. Rep. Joyce Beatty.

The Ohio Democrat was one of four federal lawmakers gathered Wednesday to talk about the Justice for Victims of Trafficking Act (JVTA), a 2015 measure that they claim isn't getting enough respect from the Department of Justice (DOJ). For instance, the DOJ has not provided lawmakers with data that JVTA mandated concerning human-trafficking arrests and convictions. "We do need accurate data on this," said Republican Rep. Ann Wagner (Mo.) Wednesday. So, in the spirit of accurate data, I asked Rep. Beatty where her child sex-trafficking statistics came from.

I was told they came from a report commissioned by the Ohio Attorney General's office. The only such report comes from 2010 and was prepared by the Ohio Trafficking in Persons Study Commission, a group commissioned by then-Ohio Attorney General Richard Cordray and comprised of two professors, the U.S. District Attorney for the Northern District of Ohio, and representatives from city and county law-enforcement units, Immigration and Customs Enforcement (ICE), and the nonprofit Not for Sale. And it is, to put it mildly, a mess.

"To identify the number of [Ohio] youth … who are at-risk for child sex trafficking and have become victims in the sex trade, the research team identified risk factors that included" homelessness, running away from home, and other "vulnerability factors," the committee states in an executive summary. By youth, minor, adolescent, or child sex trafficking victims, the committee means "those between the ages of 12 and 17" who "traded sex for money, items, drugs, food, or a place to stay." Ultimately, the committee arrived at the very specific-sounding estimates of 2,879 American-born adolescents "at-risk" for sex trafficking each year in Ohio and "1,078 youth [who] have been trafficked into the sex trade over the course of a year."

Let's start by examining the latter figure, which is often presented—by lawmakers like Beatty and local media—as a reliable accounting of actual victims in Ohio. At the root is an FBI-led operation that took place in Toledo and its surrounding county between 2005 and 2009, called "Operation Innocence Lost."

A precursor to today's expanded "Operation Cross Country," Operation Innocence Lost was established "in 14 cities with the highest incidence of child prostitution," according to an 2005 FBI press release. The city of Toledo, located in Lucas County, was one of them. It's also a city with a decaying economy and one of the highest crime rates in the region. According to 2013 FBI crime data, it's the ninth-most dangerous metropolitan area in the Midwest, number one in Ohio, and 49th in the entire United States.

In the course of Operation Innocence Lost, agents from the FBI, the Toledo Police Department, and the Lucas County Sheriff's Office identified "60 minor victims of sex trafficking." Forty-five—an average of 15 per year—came from Lucas County. It's this number from which the committee extrapolated for all of Ohio. Using Lucas County population data, the researchers arrive at the conclusion that 15 per 24,965 Ohio girls ages 12 through 17—or 0.0006 percent—are "successfully recruited into the sex trade from Ohio each year."

With 337,961 Ohio girls in this age group overall, that 0.06 percent rate yields an estimate of… 202 per year. How do we get from there to 1,078 victims—especially considering that Toledo has (according to the FBI's own data) more violent-crime and underage-prostitution problems than almost anywhere else in Ohio? Simple: Rather than acknowledge that extrapolating from Toledo might yield an inflated statewide estimate, the committee multiplies the Toledo number by five.

The basis for this decision was a study from the University of Toledo of Lucas County minors engaged in prostitution. That study claims that every minor talked to by researchers knew an average of 5 more underage minors "that were not known to law enforcement, but who were engaging in the sex trade." From the committee report (emphasis mine):

Because of the underground social networks, many girls involved know each other by their street names or nick names. In actuality, they may be unaware of which girls are engaging the Innocence Lost Task Force and not engaging the Task Force. But because other communities in Ohio do not have a focused Innocence Lost Task Force, the team decided the estimates provided by the victims may be an accurate measure for other communities throughout Ohio. Therefore, in using this as a measure for Ohio, we find that there may be over 1,000 girls per year in Ohio that are involved in the sex trade.

For estimating the number of 12- to 17-year-old Ohio boys, the committee uses a somewhat different (and even sloppier) method. Because being gay, transgender, or a runaway are "risk factors" for male sex-trade involvement, and because three to five percent of the overall U.S. population identifies as gay, lesbian, bisexual, or transgender, the committee decides that three to five percent of male runaways who go missing for more than two weeks probably become trafficking victims. This gives us an estimated 63 underage male victims, for a total estimate of 1,078 trafficked adolescents in the state.

If you can believe it, the committee's method for estimating "at risk" Ohio youth gets even less scientific and relies on even more half-baked assumptions.

Remember, the state claims that 2,879 American-born adolescents in Ohio are "at-risk" of becoming trafficking victims each year. To arrive at this conclusion, committee members "relied heavily" on the methodology from a 2001 study on the commercial sexual exploitation of children in the United States.

That study, conducted by Richard J. Estes and Neil Alan Weiner, has since been widely discredited. The respected Crimes Against Children Research Center implored people to please stop citing its numbers. Its conclusions have been debunked by outlets such as The Washington Post. The study's own author, Estes, no longer stands by the research. And even the Ohio committee that relies heavily on it admits, in the same report, that the study is plagued by "many shortcomings and obvious flaws."

To arrive at a nationwide estimate of "at risk" youth, Estes and Weiner came up with 14 factors they said increased the chances of an adolescent entering or being forced into the sex trade. These included things such as involvement with child protective services or the foster care system, a personal history of depression, a recurrent illness in the family, being a member of a sexual minority, female gang involvement, living in communities where "pre-existing prostitution markets existed" or "a large number of street youths gather," and living in the presence of "sexually unattached and transient males including military personnel, truckers, conventioneers, and tourists."

Based on the estimated prevalence of these risk factors, Estes and Weiner claim that one quarter of one percent of all American youth are "at risk." With 675,922 minors between the ages of 12 and 17 in Ohio, a 0.25 percent risk rate yields an estimated 1,690 "at risk" Ohio adolescents.

But the committee doesn't stop there. Following in Estes' and Weiner's footsteps, they add to this number two separate (and equally dubious) estimates. Remember, the 0.25 percent risk rate was for all adolescents. Risk is higher, claimed the researchers, for homeless youth and runaways. How much higher? Estes and Weiner had declared that 35 percent of "endangered runaways"—defined as youth who leave home without permission and stay away overnight—risk commercial sexual exploitation if they are gone for more than one week. Using numbers on endangered runaways from Ohio, the committee gets an estimated number of 1,070 at-risk runaways.

They then turn to homeless youth. A 2001 study of 455 homeless youth in Nebraska, Missouri, Iowa, and Kansas found that around 20 percent said they had traded sexual favors for a place to stay. Applying this 20 percent calculation not to the number of homeless youth in Ohio but to the number of adolescents who went missing for two weeks or longer ("for the period of time the youth is gone, they are technically homeless," states the Ohio report) the committee concludes that 1,261 homeless Ohio minors are at risk.

To arrive at a final number, the committee combined these various estimates, for a total of 4,021. Because two of these figures were derived from the same population (runaways missing for more than two weeks), and the other from all Ohio adolescents, the committee admits there might be some overlap in their estimates. For no precise reason, they decide that 25 percent may be duplicates, and reduce the 4,021 estimate by a quarter. From here, they arrive at the conclusion that some 2,879 Ohio 12- to 17-year-olds are "at risk" of being victimized by sex traffickers each year.

Ohio Rep. Beatty is far from the only one to quote these figures, which appear routinely in Ohio media—including major city newspapers such as The Columbus Dispatch, the Cincinnati Enquirer, and the Dayton Daily News—and government statements as hard facts (i.e., "1,000 children are trafficked in Ohio each year"). But as someone leading an effort for better federal data on sex trafficking, Beatty might want to look a bit more closely at the data she herself cites, and demand better data from her home state.

The Dispatch and other outlets also claim that among these alleged 1,000 children who "fall victim to human sex trafficking" each year in Ohio, the average age is 12 or 13 years old. In fact, 12 was the very youngest age included in the Ohio Attorney General's study, and the youngest (and most rare) age of any minor recovered nationally throughout Operation Innocence Lost. A report from the Ohio Human Trafficking Commission that looked at identified, not theoretical, victims from Ohio in 2015 found a total of 203 alleged victims throughout the state. Around three percent were age 13 or younger, 11 percent 14- or 15-years-old, 15 percent 16- or 17-years-old, and 71 percent adults.