Everything Is a Remix returns for a special Star Wars edition. 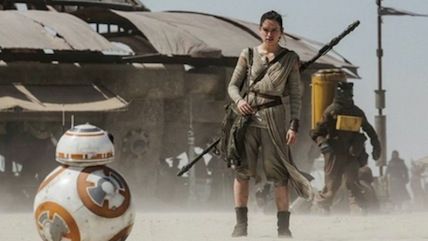 When Star Wars: The Force Awakens hit theaters late last year, the critics' most common complaint about the film held that it is a barely-remixed remake of the original Star Wars. This argument attracted the attention of filmmaker Kirby Ferguson, whose much-viewed 2010-11 web series Everything Is a Remix made the case that creativity has always involved sampling and repurposing the art that preceded you.

So this week Ferguson released a postscript of sorts to his series, titled Everything Is a Remix: The Force Awakens. It contrasts the ways J.J. Abrams remixed older material to make the new Star Wars movie with the ways George Lucas remixed older material to make the original; it offers an argument about what it takes for remixing to produce something satisfyingly original; and it includes a brief cameo by Reason's own Peter Suderman, or at least by Peter's byline.

For yet more on Star Wars and remixes, read Amy Sturgis' Reason feature "Star Wars, Remixed." And for more from Ferguson, check out his current web series, This Is Not a Conspiracy Theory.