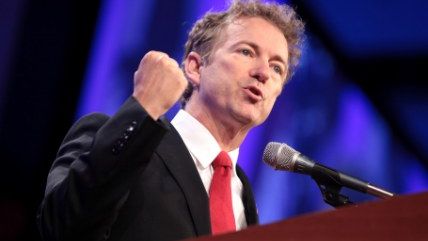 Remember back during the debates when we saw actual discussions of what American foreign policy might look like and how American military might approach the threat of terrorism originating from the Middle East? It seems like a lifetime ago, now that our current political discussion is revolving around which presumptive candidate is more corrupt and reprehensible to the American electorate.

Former Republican presidential candidate Sen. Rand Paul (R-Ky.) is back in Time magazine today to remind us of that debate. The background is the fact that President Barack Obama, who ran for office promising to end our wars, will leave office having been at war during his entire presidency, longer than any other president in U.S. history.

The wars have been facilitated by the Authorization for the Use of Military Force (AUMF) that was put into place to fight al Qaeda following Sept. 11. The purpose of the AUMF has been significantly distorted to cover the current fight against the Islamic State and deadly drone strikes in countries like Pakistan and Yemen. Paul, whose less interventionist foreign policy proposals as a presidential candidate included passing a new, more specific AUMF to cover the fight against ISIS, writes in Time that he plans to introduce an amendment to the upcoming defense appropriations bill. His goal is to force the president to return to Congress to seek a new AUMF:

My amendment will state that it is the sense of the Senate that the 2001 9/11 AUMF and the 2002 Iraq war AUMF do not apply to today's war in Iraq and Syria and that if war is to continue there must be a new declaration of war by Congress.

One generation cannot bind another generation to perpetual war. Our Constitution mandates that war be authorized by Congress. Period.

My colleagues who have taken an oath to uphold the Constitution should support my amendment or at least have the decency to debate it.

Think about it for a moment. These original authorizations were passed back when some of the men and women fighting in our current conflicts were still small children. No president—including this president—deserves this kind of extra-constitutional power.

Obama has called for a new AUMF, but nevertheless insists that his current war-making is fully legal. Hillary Clinton has taken the same position. Trump tends to be tough to pin down on actual foreign policy plans (a deliberate choice), but while he has spoken about being less of an interventionist than other Republican candidates (and arguably Clinton as well), he has also made it clear that he has little interest in restraints on the power of the president and has promised to "bomb the shit" out of ISIS. Last night on The O'Reilly Factor on Fox News, Trump said he was willing to go to Congress to declare war, but the conversation left me at least with the impression he didn't feel he would be at all restrained by whether he did so or not. (Read the transcript here and decide for yourself.)

Paul notes in his Time op-ed, "The Founders were very careful not to vest something as important as the decision to go to war to the whims of one person." Conor Friedersdorf has a very similar warning over at The Atlantic. He takes note that many people are worried that Trump could bring a new brand of fascism to the White House, but few seem to have considered that Trump wouldn't be so potentially dangerous if the power of the executive branch hadn't become so unrestrained:

While writing or sharing articles that compare Trump to Hitler, Mussolini, and Franco, few if any have called on Obama or Congress to act now "to tyrant-proof the White House." However much they fear Trump, however rhetorically maximalist they are in warning against his elevation, even the prospect of him controlling the entire apparatus of the national security state is not enough to cause them to rethink their reckless embrace of what Gene Healy calls The Cult of the Presidency, a centrist religion that persisted across the Bush administration's torture chambers and the Obama administration's unlawful War in Libya.

With a reality-TV bully is on the doorstep of the White House, still they hesitate to urge reform to a branch of government they've long regarded as more than co-equal.