Overtime rules that reduce worker and employer flexibility will ensure that there are few jobs and less money to go around in the years to come. 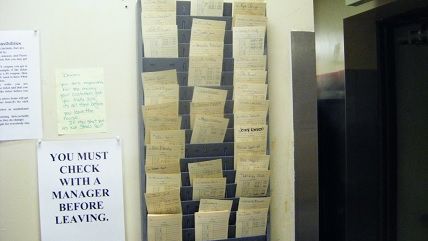 Rest easy, hard-working Americans! The government is well aware of your strenuous labors, and plans to see that you're well-compensated—at a second job, or maybe off the books.

No need for the thanks, really. It's all in a day's bureaucratic work, punching out no later than 5.

Last week, to save Americans the grueling ordeal inherent in working things out among themselves, the U.S. Department of Labor doubled the salary threshold below which time-and-a-half pay for working more than 40 hours per week is mandatory starting December 1 of this year. Overtime at the government-set rate will have to be paid to those making less than $47,476 per year—up from $23,660. It will automatically increase every three years going forward.

The goal, say the feds, is to "spread employment by incentivizing employers to hire more employees rather than requiring existing employees to work longer hours" and "to reduce overwork and its detrimental effect on the health and well-being of workers."

No need to fret, the feds assure us, there are "plenty of options" for complying with the new overtime rule:

Some combination of the above.

That's easy then! It's an instant boost to pay and time off! Why didn't we think of this before?

Well… we did. It's been tried, and it didn't work out as planned. Experience tells us that the federal bureaucrats' list doesn't really detail all of the options available to employers and workers—and doesn't delve into the costs and trade-offs at all.

One option not mentioned on that list is the possibility that employers might farm out work to temps and part-timers. As Nick Gillespie has mentioned, economists Donald J. Boudreaux and Liya Palagashvili examined similar rules elsewhere for the Mercatus Center and found that in Canada "overtime pay regulation leads to greater moonlighting."

Imagine the employees of two companies punching out at 5 and crossing the street to do each other's jobs for a couple of hours, and you get the picture.

But it's not just a matter of turning extra hours into perverse job-sharing arrangements. That same Mercatus study notes that start-up companies—tech start-ups in particular—tend to demand long hours in return for equity compensation rather than cash. Employees willing to take a gamble can potentially benefit in a big way if a start-up pans out. Those would-be risk takers are bound to take a big hit from rules that reduce the flexibility they require for such arrangements.

Telecommuters, too, will likely take a hit, since they work out of sight of employers under-the-gun to pay extra for time worked over the 40-hour limit. Many businesses worried about facing unexpected costs will insist that employees work on-site where their hours can be monitored.

Those employers on the hook to keep the same people working over the limit can be expected to adjust base pay downward so that overall compensation, with overtime included, doesn't get a boost, the study notes.

Harvard economist Jeffrey Miron agrees. After a short period of padded paychecks for some workers, he says, "In the longer term, employers will reduce base-level wages so that, even with overtime, total compensation for employees working more than 40 hours is no different than before."

That's what people can do within the law. But responses to tight rules often take the form of simply ignoring them. A 2011 Reuters article on Italy's economy noted that the country's high taxes and intrusive red tape had driven many entrepreneurs, laborers, and established companies partially or entirely underground. Among the responses to labor regulations were "companies that violate rules by paying overtime off the books."

"The most influential factors on the shadow economy and/or shadow labor force are tax policies and state regulation, which, if they rise, increase both," commented economist Friedrich Schneider of the Johannes Kepler University of Linz, Austria, just a year later.

Not that this is a recent revelation. A 1994 working paper for the World Bank pointed out that labor regulations that raise worker compensation above the market level drive economic activity off the books—and subsequently retard further economic growth because of the uncertainty inherent in operating illegally.

None of these responses, you'll note, "spread employment" or "reduce overwork." They also don't put any more money in workers' pockets, because employers can't and won't pay more for labor than it's worth to them.

"Expanded overtime will benefit some employees in the short term; cost others their jobs or lower their compensation in the medium term; and have no meaningful impact in the long term," Harvard's Miron concluded in response to the new rules. "Is that good policy?"

No meaningful impact, that is, except for a lot of energy and innovation expended to accommodate the new rules to the economic reality that dictates that labor, like everything else, is worth what it's worth—not an arbitrary price chosen by bureaucrats. And the strangled start-ups, frustrated telecommuters, and under-the-table workers might also have a bone to pick.

That's a lot of hassle to address supposed problems that probably can't be fixed the way the Department of Labor wants to fix them—and may not actually be a concern at all. Looking at the Department of Labor's justifications for the new rule—spreading employment and reducing overwork—Boudreaux and Palagashvili objected that based on current economic knowledge, "there is neither theoretical nor empirical support that the proposed regulation will meet its stated objectives."

Bluntly, there's never been any reason to expect that the overtime rule would have the beneficial impact that the feds predict.

And there is likely no reason to even try to achieve that impact. They add, "We find that the department provides no evidence that an 'underpayment' or 'overwork' problem exists in the United States."

There is evidence though—strong evidence from sources including the government's own Small Business Administration—that "small businesses, defined as firms employing fewer than 20 employees, bear the largest burden of federal regulations." And, despite a post-Great Recession bump, entrepreneurship continues a long-term slide, with Americans starting fewer businesses than in the past. "The firm entry rate—or firms less than one year old as a share of all firms—fell by nearly half in the thirty-plus years between 1978 and 2011," the Brookings Institution warned in 2014.

"Proposed changes to the Department of Labor's overtime rule would do little for small business employees while making it harder and more expensive for small business owners to run their company," the National Federation of Independent Business cautioned in vain before the rule was finalized.

Overtime rules that reduce worker and employer flexibility, and pose a specific threat to the start-up practices preferred by the dynamic tech sector, seem almost designed to make sure that there will be few jobs and less prosperity to go around in the years to come.