A government lawyer encouraged corrections officials to proceed with an execution using the wrong drug. 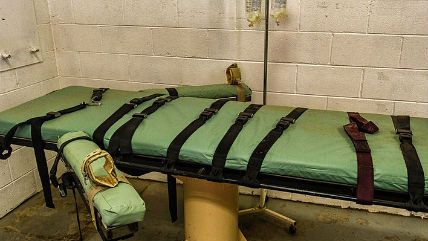 In April 2014, the state of Oklahoma set out to execute inmate Clayton Lockett using a drug cocktail that had not previously been tried in the U.S. Rather than passing away quietly within about 10 minutes, as usually occurs with lethal injections, something went horribly, infamously wrong: He writhed and strained and groaned, speaking aloud, and at one point—after he was supposed to have been knocked out—trying to sit up. Officials attempted to halt the procedure, supposedly even discussing among themselves the possibility of rushing Lockett to a hospital. More than 40 minutes after the drugs were administered, he suffered a heart attack and died.

It was not the Sooner State's finest hour. After such a public failure on the part of the corrections department, there should have been every incentive to take whatever precautions were necessary to be sure nothing of the sort would ever happen again. Indeed, the state waited nine months before carrying out another execution. By then, Oklahoma Assistant Attorney General John Hadden said, all involved were "confident that they have addressed every one of [the mistakes] and is ready to move forward."

That execution, in January 2015, was botched as well. An autopsy of the inmate, Charles Warner, released last October showed that the wrong substance was used. Per The Guardian:

The report revealed that officials injected Warner with potassium acetate, when state protocol calls for an injection of potassium chloride, which stops the heart. It is the third and final drug used for executions, following a sedative and paralytic.

The drug vials and syringes used in Warner's execution were submitted to the medical examiner's office, and the autopsy report shows that two of the syringes were labeled with white tape "120 mEq Potassium Chloride".

We now know the story gets—if you can imagine it—even worse. Yesterday a grand jury released a new report finding, among other things, that:

The grand jury declined to hand down any indictments for now, but the report is, to put it mildly, scathing. "It is unacceptable for the governor's general counsel to so flippantly and recklessly disregard the written protocol and the rights of Richard Glossip," it reads in one place. "This investigation revealed that the paranoia of identifying participants clouded the Department's judgment and caused administrators to blatantly violate their own policies," it reads in another. "The Warden carelessly assumed others would fulfill [her] own oversight responsibility in ensuring that the proper drugs were procured," blares a particularly critical subheading.

"Oklahomans should carefully consider the grand jury's conclusions and ask themselves whether they should trust their state with" the authority to execute people, said Marc Hyden, national coordinator of Conservatives Concerned About the Death Penalty, in a statement.