The GOP nominee turns the beer company's branding stunt into his own. 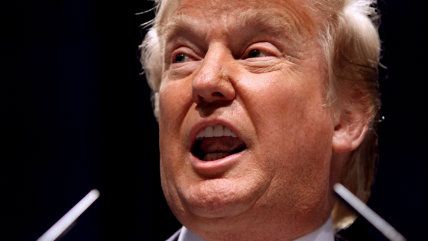 Yesterday, Budweiser announced that it would rename its beer "America," at least for the next few months, in expectation of what one of the company's executives described as "maybe the most American summer ever." A creative director at the beer company's branding firm further noted that, "We thought nothing was more iconic than Budweiser and nothing was more iconic than America."

This is not a terribly clear or convincing explanation, and it offers no real rationale for potential beer drinkers to choose Budweiser. And yet for the purposes of selling cheap, watery beer, it is probably more effective than simply admitting that this was an empty summer branding stunt.

Donald Trump, however, had a different explanation. On an appearance on Fox & Friends this morning, the Republican party's presumptive presidential nominee suggested that the beer company changed its name to "America" as an advance recognition of the excellence of his presidency.

Introducing the presidential candidate, who was appearing by phone, host Steve Doocy said, "You know somebody who's trying to make America great again is Donald Trump, who joins us on the line. Donald Trump, do you think you had something to do with Budweiser changing the name of their beer for the summer from Budweiser to America?"

Trump responded: "I think so. They're so impressed with what our country will become that they decided to this before the fact." A clip of the segment can be viewed here.

If this were a scene from a satire of contemporary media and politics, it would come across as far too obvious. Even accounting for the necessity of playful-yet-banal introductory banter in situations like these, the exchange comes across as nonsense. It is, however, a revealing kind of nonsense.

First, the host plants the off-the-wall idea that Trump might be responsible for Budweiser's transparent attempt to generate attention through a rebranding stunt. Then Trump plays along, suggesting that, yes, indeed, his candidacy is already making an impact on national character and culture, even before he has won the election.

Trump's argument makes as much sense as Budweiser's explanation for its beer rebranding, which is to say that not only does it makes no sense at all, it does not even rise to the level of attempting to make sense. It is not intended as a coherent argument, but as a momentary pose struck in hopes of generating some attention. It offers no substance, and nothing in the way of specifics to entice potential voters. Like so much of Trump's campaign, it is just gibberish brand positioning, devoid of meaningful specifics.

With the help of friendly cable news hosts, then, Trump used Budweiser's empty branding stunt as a launching pad for his own. Expect a lot more of this as we head into what may be the most Trumpish summer ever.