Debating the influence of the conservative chief justice on the 2016 GOP race. 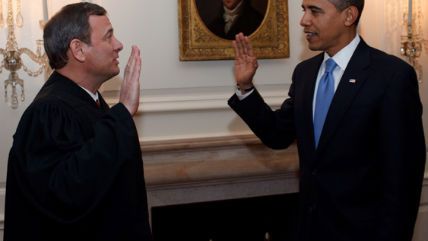 A lively debate has broken out in legal circles over what role, if any, Chief Justice John Roberts' 2012 decision upholding Obamacare played in the rise of Donald Trump. In a speech this week at the Heritage Foundation, and in a follow-up blog post at the Volokh Conspiracy, Georgetown University law professor Randy Barnett argues that "Chief Justice Roberts' decision to uphold the Affordable Care Act led to the demoralization of the popular constitutionalist movement that was the Tea Party, which in turn led to rise of Donald Trump in the Republican Party." Writing at The Federalist, Cato Institute legal scholar Ilya Shapiro makes a similar point: Roberts' "twistifications drove the constitutionalist Tea Partiers into the arms of the populists—or made it easy for their populist instincts to 'trump' their constitutional ones (pun unintended, but fitting)."

Writing in response to Barnett and Shapiro, George Washington University law professor Orin Kerr offers a different view. "To the extent public perceptions of Sebelius made any difference," Kerr writes, "the fault for the rise of Donald Trump does not belong with Chief Justice Roberts. Instead, it belongs with those who tried to delegitimize the Roberts opinion for their own ends and had it backfire on them big-time." In other words, Kerr maintains, those critics who attacked Roberts for writing a "dishonest" or "unprincipled" ruling deserve some blame of their own. By attacking Roberts in that particular fashion, this argument goes, those critics opened the floodgates, helping to create the toxic political environment that's now being exploited so successfully by Trump.

Both sides of this debate raise interesting points. It's not hard to imagine certain Tea Partiers becoming so disenchanted by the Supreme Court's actions that they lost faith in constitutionalism and instead became receptive to the strongman posturing (and constitutional illiteracy) of Donald Trump. We followed the Constitution and lost anyway, this line of thinking goes, so why not just elect somebody who'll start breaking the rules in our favor for a change? Or at least that's the general idea.

But Kerr also raises a valid point about certain conservative and libertarian responses to the Obamacare decision. You don't have to agree with Roberts' judgment (I don't) to be able to recognize that the chief justice was still acting in a principled fashion and was in fact sticking to a very specific set of conservative legal principles. Those principles go under the heading of judicial restraint or judicial deference. Here's how Roberts himself justified his decision to uphold Obamacare: "It is not our job to protect the people from the consequences of their political choices." Not only is that a textbook argument for judicial restraint, it's also a clear reference to the words of Progressive era Justice Oliver Wendell Holmes Jr., one of the Supreme Court's greatest and most influential advocates of judicial deference. "If my fellow citizens want to go to Hell I will help them," Holmes once declared of his judicial approach. "It's my job."

If you really want understood what happened in the 2012 Obamacare case, you first need to understand why a legal conservative like John Roberts felt comfortable invoking a Progressive legal hero like Oliver Wendell Holmes. What's the explanation? Here's the short version, excerpted from my recent book Overruled: The Long War for Control of the U.S. Supreme Court:

Judicial restraint, as Roberts well understood, was not only a touchstone of the Progressive left; it was also a philosophy adopted by many members of the modern right. Conservative icon Robert Bork, for example, the former Yale law professor and federal judge whose failed 1987 Supreme Court nomination had galvanized Republicans and set the stage for future judicial confirmation battles, was an outspoken proponent of granting Holmes-style deference to the elected branches of government. As Bork argued in his bestselling book The Tempting of America, the "first principle" of the U.S. system was not individual rights; it was majority rule, which meant that when it came to the vast preponderance of political disputes, the courts should simply butt out. "In wide areas of life," Bork wrote, "majorities are entitled to rule, if they wish, simply because they are majorities."…

That was the path taken by Roberts in the health care case. The only problem was that very few conservatives wanted to join him for the ride. Instead of seeking judicial deference, they wanted the justices to nullify President Obama's signature legislative achievement and overrule the elected branches of government—something the Supreme Court had not done since the great legal battles over Franklin Roosevelt's New Deal in the 1930s.

This was the other conservative path, the one Roberts refused to take. Like the Bork-Holmes approach, it too has its roots in the legal and political controversies of the late nineteenth and early twentieth centuries. Except this school of thought was not inspired by Holmes, but by the legal figures who opposed him: the conservative and libertarian judges and lawyers who rejected judicial deference and worked instead to strike down many of the laws imposed during the Progressive and New Deal eras.

(For much more on this longstanding clash of constitutional visions, please check out my book.)

Roberts' decision to uphold Obamacare thus clearly adhered to a particular set of legal principles. The problem is that those particular principles seek to elevate judicial deference to the will of the majority above the judicial duty to act as a check on the democratic branches of government, a perfect recipe for the Court's pro-Obamacare ruling.