Rick Perry Endorses Cancer for President, Would Be Willing to Accept Position as Cancer's Running Mate 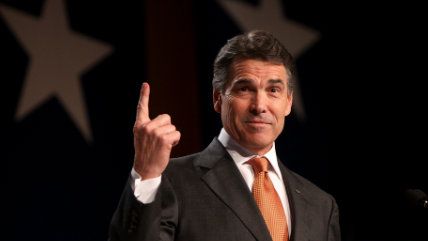 During his brief,  run for the GOP presidential nomination last year, former Texas Gov. Rick Perry emerged as one of the loudest and harshest voices of criticism against Donald Trump. Last July, shortly after Trump entered the race, Perry devoted an entire speech to blasting Trump as a form of "cancer" on the conservative movement.

In that speech, Perry declared in no uncertain terms that Trump was a serious problem for conservatives and that Trump's campaign threatened to destroy the entire ideological movement if not swiftly and soundly defeated. The entire text of the speech is still online. Here is a characteristic sample:

Let no one be mistaken – Donald Trump's candidacy is a cancer on conservatism, and it must be clearly diagnosed, excised and discarded.

It cannot be pacified or ignored, for it will destroy a set of principles that has lifted more people out of poverty than any force in the history of the civilized world – the cause of conservatism.

I feel so strongly about this because I believe conservatism is the only way forward for this country.

Yesterday, Perry demonstrated exactly how strongly he feels about this by endorsing Donald Trump for president.

"I believe in the process," Perry said in an interview with CNN, "and the process has said Donald Trump will be our nominee and I'm going to support him and help him and do what I can."

Perry's offer of help and support extends to accepting the vice presidential nomination, should it be offered to him, he said. "I am going to be open to any way I can help. I am not going to say no," he told CNN when asked about the possibility. Perry acknowledged that he does not believe Trump to be an ideal nominee, but he also praised Trump as "one of the most talented people who has ever run for the president I have ever seen." (Perry's own skills as a presidential candidate are legendary.)

Perry's campaign last year was built on big ideas and policy innovation. He appears to have given up on that approach.

Instead, Perry is now arguing that conservatives should give cancer a chance, because, after all, it proven to be quite successful, and further saying that he would be willing to support cancer in achieving its goals however he can. Cancer-Perry 2016!