"Nothing better illustrates the phoniness of politicians," he writes, "than the ease w/ which they shift from blasting one another to praising one another." 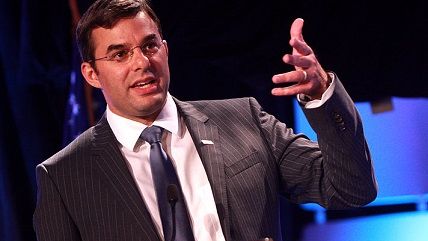 A series of Republicans who once were harshly anti-Trump are now lining up to kiss the Donald's ring. But it doesn't look like that line will include Michigan Rep. Justin Amash, the libertarian-leaning congressman who once suggested that Trump "presents a kind of threat to our system that is maybe in some ways bigger than what the Democrats present." If you head over to Amash's Twitter page right now, you'll see that this is his most recent Tweet:

Hmm: What do you think he's referring to? The item right below that—retweeted from Reason—certainly suggests that he isn't about to jump on the Trump train:

And below that, a retweet from Sen. Ben Sasse, the anti-Trump Nebraska Republican who's been calling for an independent or third-party candidate to emerge:

I have reached out to Rep. Amash's office to ask who, if anyone, he plans to support for the presidency this November, and I'll update this post if/when I get a response.