Ted Cruz Will Announce Carly Fiorina As His Running Mate. He Knows His Campaign's In Trouble.

The early VP pick is a last-ditch effort to stop Trump. 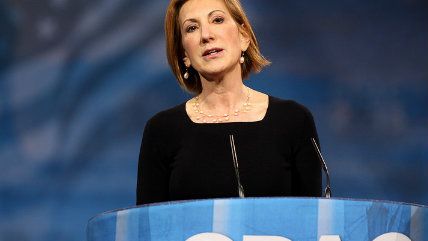 It's an unusual move from a trailing candidate with the race still up in the air, and it typifies the unusual state of the GOP primary race, where two of the three remaining candidates cannot win the nomination except via a contested convention.

The announcement appears intended to draw interest and attention to his campaign even as his chances of winning the GOP nomination have become increasingly slim. Indeed, combined with Cruz's strategic voting deal with rival candidate John Kasich earlier this week, it suggests that Cruz is acting with the understanding that the odds are stacked against him.

At this point, Cruz is in a very difficult position: It is mathematically impossible for him to win the GOP nomination outright by winning a majority of GOP delegates before the party convention in July. So his only hope is to keep Donald Trump, the clear frontrunner in the race, from achieving a clear majority himself, and then convince enough GOP delegates to vote Cruz in a multiple-ballot scenario.

To that end, Cruz cut a deal—or at least tried to cut a deal—with Ohio Gov. John Kasich earlier this week to stay out of Oregon and New Mexico, where Kasich may perform better, in exchange for Kasich attempting to clear a path for Cruz in Indiana. (Kasich, perhaps unsurprisingly, has not exactly stuck to the deal.)

Cruz's task became much more difficult after Trump's primary wins in several northeastern states last night. Trump didn't just win; he won by larger margins than expected, suggesting that he is building momentum, and that Trump's rivals may have a difficult time keeping him from achieving an outright victory before the convention.

Indeed, Trump said last night that he now considers himself the "presumptive nominee." Cruz dismissed that idea, and insisted that the race was moving back into more favorable terrain in Indiana, which votes on May 3, and could prove decisive in the race.

The exact language Cruz will use in the Fiorina announcement, which was first reported by WMUR and also reported by National Review Online and The New York Times, isn't clear yet, but overall it looks like an attempt to counter Trump's momentum going into the Indiana contest.

The former tech executive dropped out of the race in February, but throughout last fall, she was one of the more direct and effective critics of Trump, especially in the debates. She repeatedly hit Trump for abuse of eminent domain, saying that the real estate mogul "has engaged in crony capitalism in its most raw and abusive form." And she provided one of the most memorable moments in the early primary debates when she curtly responded to Trump's insulting descriptions of her face by implicitly drawing attention to Trump's consistently crude remarks about women. It's likely that she will continue to point to Trump's record of demeaning statements about women.

In a last-ditch, long-odds fight against Trump, in other words, Fiorina looks like a pretty decent ally. It's less clear, however, what advantages she might bring to Cruz in the longer term.

Despite a few breakout moments against Trump in the debates, her campaign never managed to generate much traction. Nor does she have a record of political success. Her 2010 Senate campaign in California is memorable mostly for a deeply bizarre ad she ran titled "Demon Sheep," that featured…well, exactly what you'd expect an ad titled "Demon Sheep" to feature. Maybe that's not a liability in a year where outsider candidates have performed so well, but Fiorina has also come under fire for her tenure at the top of Hewlett Packard, which overlapped with massive layoffs in the midst of a dicey merger with Compaq. (Fiorina and her allies have defended her record as a tech exec.)

It's possible, though, that none of this will matter all that much, in part because policies and records of accomplishments simply don't seem to matter much in this campaign. Thanks largely to Trump, it's almost entirely a battle of media-ready personalities and personas. Fiorina, in some sense, is just a supporting character from early in the season returning to make a cameo appearance—or, if Cruz somehow pulls out a win, to become a regular.

But at this point, that looks unlikely, because Trump's position is so strong. No, he's not a lock for the nomination, but he's got a very good shot at securing either a majority of bound delegates, or picking up very close to a majority, and then getting to a majority by convincing some unbound delegates, like those from Pennsylvania, to vote for him on the first ballot. The reality is that there is very little time left for Cruz to stage a comeback, with or without Fiorina's help.

What this mostly tells us, then, is that Cruz knows he's in a bind, and is willing to make a dramatic move in hopes of heading off what is now the most likely outcome, which is that Donald Trump wins.