If you thought the exit of Marco Rubio meant we could forget about the welder issue, alas, no such luck. 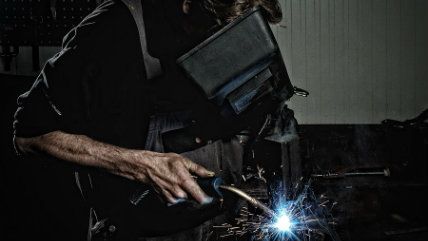 Hillary Clinton is finding the themes for her presidential campaign in language already road-tested by candidates who ran, and lost, in the Republican presidential contest.

Clinton, a Democrat, just released a campaign commercial in which the words "so we can all rise together" appear on the screen. The "right to rise" was what the Republican former governor of Florida, Jeb Bush, had said his presidential campaign was all about. Clinton must be hoping the slogan, with its vaguely Christian overtones and association with the American dream of upward mobility, works better for her than it did for him.

And Clinton has been talking on the campaign trail about welders. This "welders" concept emerged back in the fall from the lips of a Republican senator from Florida, Marco Rubio, who complained, "We know welders make more than philosophers, but we graduate a bunch of philosophers." If you thought the exit of Marco Rubio from the presidential campaign meant that you could forget about the welder issue, alas, no such luck. Clinton has taken Rubio's talking point and made it her own.

Here she is on April 18 in Staten Island, New York:

Not everybody has to go to college. There are a lot of good jobs that we need filled by people. We've got to provide the apprenticeship programs, and I want to boost what labor unions are doing to provide more apprenticeship operations. There are currently about 1.2 million jobs in this country for machinists and welders and tool and die makers and other skilled labor. And very often, these are good union jobs, which is at the core of the middle class. So let's do more to encourage more people to go that route.

Here she is on April 23 in New Haven, Connecticut:

Right now we have 1.2 million jobs that are waiting to be filled by people with advanced skills in the trades—welders, machinists, tool and die makers, and the like. We've got to get a better fit between people's interests, their job prospects, and the jobs that we need done in our society.

She used a variation on the same line on April 23 in Rhode Island:

We have 1.2 million jobs right now in America today that pay 50-, 60-, 70,000 a year for tool and die makers and welders and machinists, skilled tradespeople.  We need to convince more young people to go into those jobs if that's exactly what they want to do and the kind of life they want, and we need more training programs. That's why I want to incentivize more apprenticeships.

Clinton is correct, as Rubio was, that "not everybody has to go to college." But her logic starts to break down pretty quickly after that, much as Rubio's did.

Capitalism has a special trick that is a way to "convince more young people to go into these jobs" or "encourage more people to go that route." It's called increase the pay. If companies are lacking for welders, no one is stopping them from advertising highly paid welder jobs. Silicon Valley companies do that when they are looking for engineers and programmers. If the companies looking for welders are out seeking government encouragement for prospective welders, they might be doing it because they think that government convincing will save them from having to raise the wages.

There are other solutions to the supposed welder shortage, too. American companies could invite immigrant workers to do the jobs. That infuriates nativists but works for the companies and for immigrants who choose to come to America.

The problem with government encouragement of welders is that it's hard for the government to forecast in advance how many welders will be needed. Maybe someday robots will replace most welders. By then Clinton will be comfortably retired, but some unemployed midcareer welder will be in need of retraining. Maybe the government encouragement of welding careers will produce a glut of welders, driving down wages and leaving a bunch of unemployed people trained as welders but with no other marketable skills.

For what it's worth, the Obama administration's Department of Labor predicts that the number of jobs for welders, cutters, solderers, and brazers will grow at a "slower than average" rate between 2014 and 2024, compared to other professions. The labor department also reports that the median pay for these jobs is $38,150 a year, or $18.34 an hour.

That is less than the $50,000 to $70,000 a year that Clinton is touting for these jobs in her campaign rhetoric. It is a lot less than Clinton herself was paid by Goldman Sachs for giving speeches.

I've got nothing against welders or against training them. There can certainly be dignity in honest manual labor. But there is something a little grim about Clinton, the multi-millionaire graduate of Wellesley and Yale Law School, lecturing about how more people ought to skip college and instead work for $18 an hour as welders. Whatever happened to the part about how "we can all rise together"?