Silly oversized masks and a benign, wordless, apolitical dance routine was too hot for a Massachusetts public school to handle. 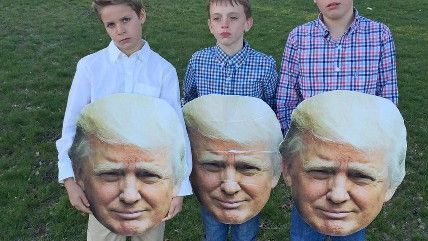 Christian Mattaliano, Marc Maggiacomo, and David Maggiacomo had been dubbed the Bobblehead Boys after performing a similar number last year, only then they wore masks bearing the face of the school's retiring principal.

When the three boys became the Dancing Trumps at the morning edition of this past Wednesday's school talent show, "at least one" parent complained, according to the Boston Globe, which led to school officials forbidding the boys from reprising the performance at Wednesday's evening talent show.

Whether the complainant was offended because of pro or anti-Trump sentiments is unclear, though a similar skit performed by Wellesley grade-schoolers acting as Donald Trump and Marco Rubio was also nixed from the night show, apparently because a parent found it disparaging to the Republican Party.

One of the boys' parents, Laurie Mattaliano, told the Globe that the experience has left the boys feeling like they did something wrong even though, "No words were spoken. It's just pop culture. The skit took no stance in support or defamation."

The Wellesley school superintendent, David Lussier said to the Globe, "We wanted to make sure that nothing we are doing would be perceived as biased in some way" and that "in a highly charged political environment like the one we're in" the school talent show isn't an appropriate place to engage the upcoming presidential election.

Christine Norcross, whose son was one-half of the controversial Trump/Rubio dance-off said, "I'm so happy that he even knows who's running for president."

Earlier this week, Reason's Robby Soave noted the recent predicament of a Maryland high school student who was instructed to write an essay in the outrageous style of 18th century satirist Jonathan Swift. For his compliance, the student was subject to an official public shaming by the school.

But at least the Maryland student wrote something deliberately provocative, whereas you could watch video of the Dancing Trumps' two-minute performance a hundred times and not discern any specific political point of view.

These are fifth graders who are aware that adults are working themselves into a lather over some old guy with orange skin and yellow hair, and by dancing around wearing his face, they were having some fun with the idea of grown-ups taking things way too seriously.

If anything, the effectiveness of the routine lies in the reaction of the person (people?) who complained. The sublime absurdity of the Bobblehead Boys' performance was further demonstrated by the administrators who were cowed by the slightest bit of discomfort expressed by adults over some kids expressing themselves through some innocent joyful fun.