Millennial women are ambivalent about feminism, fans of Bernie Sanders, fearful of Donald Trump, and want government out of their uteruses and their gun racks, thanks. 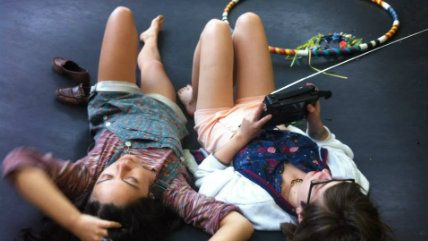 That young women dig Bernie Sanders and tend to lean left isn't too surprising. But would you have guessed that gun rights rank as high as abortion access and "equal pay" among their concerns? Or that young conservative women are almost as worried about economic inequality as are their liberal counterparts? These findings and more—both expected and idiosyncratic—come courtesy of a new national poll of millennial women from ABC News and Refinery 29.

When asked about political affiliation, the most popular label among these 18- to 35-year-olds was "Independent," claimed by some 40 percent of respondents. Thirty-eight percent called themselves Democrats and just 16 percent identified as Republican.

The septuagenarian socialist from Vermont led young women's presidential picks, with a little more than a third of respondents naming Sanders as their top candidate. Twenty-five percent named Hillary Clinton as their top choice for the Oval Office. The Republican candidates combined earned a mere 21 percent of the potential vote, while 18 percent of those surveyed said they had no preference.

Support for Sanders skewed young—nearly half of 18- to 21-year-olds preferred him, compared to just 27 percent of the oldest millennial women. Among respondents who strongly identified as feminists, Sanders was also the preferred candidate by a wide margin: 56 percent, compared to 25 percent for Clinton and 9 percent for GOP candidates.

Republicans were the preferred choice of 27 percent of respondents who said they were not feminists, while 24 percent of this group favored Clinton and 24 percent favored Sanders.

Less than half of all the women surveyed said they identify as a feminist, while 53 percent said they are not feminist and two percent had no opinion. Pollsters followed up with those who didn't identify as feminist by asking if it's due to disagreement with "the goals of feminism" or "because you dislike the word feminist but agree with the goals?" Almost half (49 percent) said they merely disliked the word, while around a third disagreed with feminist goals.

Asked to say which of seven issues they found most important, millennial women were most likely to be concerned about "economic inequality" and student loan debt. The next biggest issues, with 11 percent each, were "protecting gun rights," "equal pay for women," and "preserving access to abortion." Eight percent listed "lowering taxes" as their top concern and 4 percent chose "strengthening the military."

For whites, inequality slightly outpaced student loans as a concern but for black women, student-loan debt dominated, with almost a third of black respondents saying it was their top issue. Black women were much less likely than white or Hispanic women to list abortion access as a top concern (two percent, versus 15 and seven percent, respectively), while blacks and Hispanics were both more likely to be concerned with women's pay.

Sanders was seen as the most "inspirational," followed by Clinton. The Democrats were the most coveted companions at a hypothetical dinner, too, although 11 percent said they'd like to sit down with Trump. For both questions, the largest percentage of votes went to "none." Thirty-nine percent of respondents said they would not like to have dinner with any of the candidates and 47 percent finds none of them inspiring.

The ABC News/Refinery 29 poll was conducted March 2-22, 2016, and involved a random national sample of 566 women, the majority of whom—65 percent—are registered voters. Voter registration was much higher for the older-half of the cohort, rising to 72 percent. Almost half of the young women pollsters talked to were married and/or living with a partner, and 37 percent were parents. A small majority (53 percent) have full-time jobs. Among college graduates, 28 percent owed more than $25,000 in student loans, while five percent of non-graduates carry that much student-loan debt.