Will the Real Jackie Robinson Finally Be Allowed to Stand Up Tonight?

Ken Burns promises a look at the man behind the mythical barrier-breaking ballplayer. It's about time. 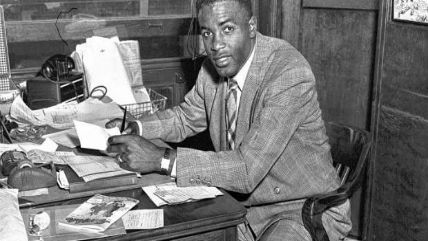 April 15 marks the 69th anniversary of Jackie Robinson breaking baseball's racist gentlemen's agreement to bar players with dark complexions from competing in the Major Leagues. As per usual, every pro ballplayer will wear Robinson's otherwise retired number 42 on Friday; also, Adidas has unveiled special Jackie Robinson cleats for the occasion, the city of Philadelphia has issued an official apology for pelting him with racist taunts back in '47, and so on.

Over the years I have argued in these pages that the inevitable and proper lionization of the man has crowded out the nuance and individuality that made the real Jackie Robinson, if anything, greater than his myth. He was fueled by an almost alarming competitive fury, played the role of both baseball's Martin Luther King and Malcolm X, was a prolific (if often ghosted) published writer, a businessman, a Rockefeller Republican, and many things besides. He would not fit in your boxes, refused to sit in the back of your bus (quite literally, and a decade before Rosa Parks succeeded tried), and proves stubbornly hard to co-opt wholesale into whatever your contemporary politics might be.

That's why I am nervously optimistic about a new, two-part Ken Burns documentary that debuts tonight called Jackie Robinson, purporting to take a look at the real man behind the legend. Here's the promo:

Burns, a massively talented filmmaker, has long nurtured a twin obsession with baseball and race, which can tilt his output toward heavy-handedness mixed with nostalgia, but usually there's more than enough journalism there to let the real story get through. I look forward to seeing how this one comes out.