There goes another news cycle. 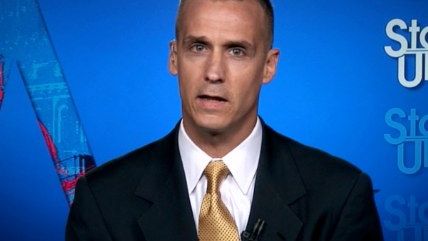 Welcome to another Donald Trump news cycle, Americans! Donald Trump's campaign manager has been charged today with simple battery over a confrontation in Jupiter, Florida, earlier in the month with then-Breitbart reporter Michelle Fields.

Corey Lewandowski turned himself into police this morning. Police released security video showing Lewandowski forcefully grabbing and yanking Fields by the arm while she's asking Trump a question. After the incident Lewandowski tweeted that Fields was delusional, he hadn't touched her, and had never even met her.

Clearly that part is not true, but it stands to be seen whether what he did actually constitutes a crime. The Trump campaign has put out a statement that Lewandowski is "absolutely innocent" and will plead not guilty.

In the non-political universe this crime would probably be handled with a plea bargain resulting in a fine and/or community service. But in the political universe, it resulted in Fields and others resigning from Breitbart News because of the way the media outlet, which had been in Trump's corner, failed to defend her. And it's presented as a reflection of Trump's character as a leader and the types of choices he'll make as president.

In any event, though I imagine the incident will probably have very little influence on the trajectory of the actual election, this is going to probably dominate the news cycle for the rest of the day. Sorry, Supreme Court deadlock on forced public employee union dues!

Oh, and apparently Lewandowski's attorney is a former prosecutor who resigned over allegations that he bit a stripper at a night club in Florida. Chew on that, folks.