Without naming any names, Starbucks celebrates "those who work to include, rather than discriminate." 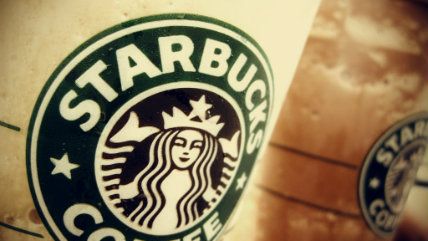 The New York Times and Wall Street Journal readers Thursday were greeted with a full-page ad calling for "compassion, respect, shared responsibility," and other high-minded virtues from Americans as we slog though the 2016 election season. "When you read the headlines… scroll through your social media feed," or "listen to the candidates," it's easy to mistake America as being "lost," the ad laments. But today, we must "go beyond the hatred and vitriol, and see a different story of America."

A "story that is not bound by party affiliations or religious beliefs."

A story that is neither "left-leaning or right-leaning."

A story about how some corporate-social-responsibility hack convinced the Starbucks leadership that this preening, saccharine call for unity was worthwhile…

Of course, Starbucks has a history of silly kumbaya messaging and stunts. In 2015, the company embarked on an awkward mission to have baristas "start a dialogue about race" with customers by penning slogans on their coffee cups. If there's anything to be gleaned from this other than a good eyeroll opportunity, it's the way much of it could be read as an implicit criticism of Republican presidential frontrunner Donald Trump. There are lines condemning the "hatred and vitriol" you see in the news and on social media and celebrating the virtues of "those who work to include, rather than discriminate."

Then again, that's pretty standard stuff for Starbucks' CEO Howard Schultz, who may be a good businessman but talks about culture and society like someone you would try to avoid late-night in the college dormitory. At Starbucks annual shareholders meeting in Seattle Wednesday, Schultz praised John F. Kennedy and Martin Luther King, Jr. and asked the assembled to "fill our reservoir back up with the true promise of our country and once again embrace what it means to be Americans."

Update: Here's page two of the Starbucks ad that ran in the Times and Journal today.