Clinton, the Worst Warmonger Running for President, Warns That Trump or Cruz Might Start a War

Clinton and Cruz both condemn Trump's "isolationism," code for asking why America must police the planet. 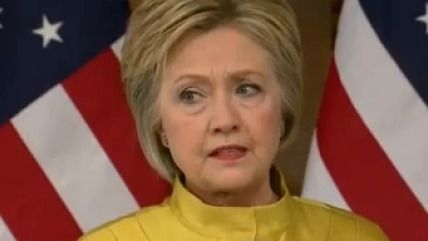 In a speech at Stanford University yesterday, Hillary Clinton warned that Donald Trump and Ted Cruz, who are vying to run against her in this year's presidential election, are risky choices because they're apt to get the United States involved in another war. That is pretty rich coming from a politician who has supported every war America has waged since the last time she lived in the White House, plus at least one that it didn't.

For the record, Trump and Cruz also say they want to depend on local proxies for ground troops in the war against ISIS. Cruz is big on bombs but not keen on sending U.S. troops, which he says "should always be the last step." During the March 10 Republican presidential debate, Trump seemed to indicate that he could imagine sending "20,000 or 30,000" American soldiers to fight ISIS in Iraq and Syria if that is what it takes. But Trump retreated from that suggestion in an exchange with Washington Post Deputy Editorial Page Editor Jackson Diehl during a visit to the paper on Monday:

Diehl: And could I ask you about ISIS, speaking of making commitments, because you talked recently about possibly sending 20 or 30,000 troops and—

Diehl: If they said that, would you go along with that and send the troops?

Trump: I find it hard to go along with—I mention that as an example because it's so much. That's why I brought that up. But a couple of people have said the same thing as you, where they said did I say that and I said that that's a number that I heard would be needed. I would find it very, very hard to send that many troops to take care of it. I would say this: I would put tremendous pressure on other countries that are over there to use their troops, and I'd give them tremendous air supporters and support, because we have to get rid of ISIS, OK, just so—we have to get rid of ISIS. I would get other countries to become very much involved.

Based on exchanges like this, I can totally picture Trump stumbling into another costly ground war in the Middle East. But the same goes for Clinton, Cruz, and anyone else who tries to "destroy" ISIS, only to find that bombs and proxy soldiers will not do the trick. The fact remains that Trump has been notably more skeptical of foreign entanglememts than Clinton or Cruz. That skepticism extends not only to deposing Middle Eastern dictators but to participating in obsolete alliances and defending rich countries that are perfectly capable of defending themselves.

Clinton sees the latter criticism as a sign of Trump's naiveté. In her speech Clinton rebuked Trump for questioning the value of NATO, which she called "the most successful alliance in history" and "one of the best investments America has ever made." Even while suggesting that European countries should spend more on their own defense, she criticized Trump for suggesting that they could at least pay the U.S. for services rendered. "Turning our back on our alliances or turning our alliance into a protection racket would reverse decades of bipartisan American leadership and send a dangerous signal to friend and foe alike," she said.

But what Trump is suggesting, in his own inconsistent, semi-articulate way, is that "bipartisan American leadership," which is code for trying to run the world, is part of the problem. Both Ron and (to a lesser extent) Rand Paul have made the same point about the perils of policing the planet. When a reporter asked Cruz about that yesterday, he drew a distinction that was accurate but irrelevant. "Ron Paul and Rand Paul both are informed and have a well-thought-out foreign policy position," he said. "I disagree with many aspects of that position, but they actually know what they're talking about."

Yet Cruz had just cited Trump's criticism of NATO as evidence of his cluelessness, saying it illustrated the Republican front-runner's "weakness and a dangerous isolationism." The sanctity of current military commitments—like Cruz's (and Trump's!) insistence that the U.S. must spend more on the military, even though it already devotes more resources to so-called defense than the next seven biggest spenders combined—cries out for questioning. The fact that the questions come from Trump does not make them any less valid.