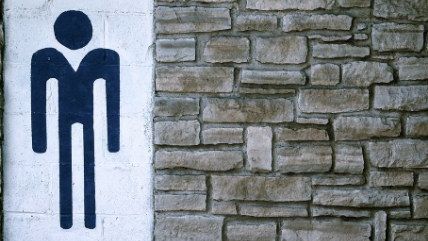 Today North Carolina's House passed a bill that would stop Charlotte from implementing an ordinance prohibiting some discrimination on the basis of sexual orientation and gender identity, set to take effect at the start of April.

Blame transgender bathroom panic, though the bill that is being implemented appears to actually prohibit much broader protections. Charlotte's law prohibited discrimination in housing and public accommodations on the basis of sexual orientation and gender identity. This meant that transgender people would be able to use the restrooms of their expressed sex, not necessarily their biological sex.

Religious conservatives argued again that this would lead to men posing as transgender in order to prey on women and girls in restrooms. Even though there's no evidence this happens, enough have found the argument convincing enough to undo regulations in places like Houston, Texas.

This state bill in North Carolina does a lot more than just overturn Charlotte's law. It does so by forbidding cities from passing many other labor regulations that may be more strict or require more of many employers than what the state requires in areas like minimum wages and benefits.

It also essentially reverses the direction of accommodation in some ways for transgender folks. It doesn't just undo Charlotte's law. It prohibits individuals in both school districts and public government agencies from using the bathroom of any sex other than what is listed on one's birth certificate, the primary exception being a single stall unisex bathroom.

The legislation made available appears to only apply this rule to public agencies and schools. Private businesses appear to be able to decide on their own how (or if) to approach transgender accommodation. At least, then, companies and businesses are not in the position to have to "police" their bathrooms either way.

The North Carolina House voted 83-25 to pass the bill. It is expected to be rushed over to the state Senate for a vote today. (Update: It passed the Senate 32-0 after Democrats walked out on the session. Read more here.)

It's frustrating to attempt to look at this issue from a libertarian perspective because it doesn't really seem like either side in this particular culture war has any interest in separating government accommodation of individuals and the private sector. It ends up being all or nothing. Transgender and gay people should expect that the government accommodate their gender expression and sexual orientation and treat them the same under the law, particularly in areas like schools where attendance is mandatory. If you're going to force transgender teens to go to your institutions, and you're going to take money from their parents to fund it, you can very well deal with it. In the private sector, though, there's no reason why cultural negotiation won't work just fine to deal with the situation, particularly since in all likelihood, people aren't even going to know when they're sharing a bathroom with a transgender person anyway.

And while I don't believe that it's necessary to expand public accommodation discrimination protection laws (mostly because so much of the public has come to accommodate LGBT voluntarily on their own), it should be a concern when a state tells individual cities what sort of laws it can and cannot pass. You don't have to agree with Charlotte's law to worry about what it means for the ability of citizens in a municipality have their local control of decision-making thwarted by the political power of representatives of other communities. If the citizens of Charlotte object to what their city leadership has done, it should be up to them locally to correct it, which is what happened in Houston.