The GOP is throwing away the youth vote. Here's how to win it back. 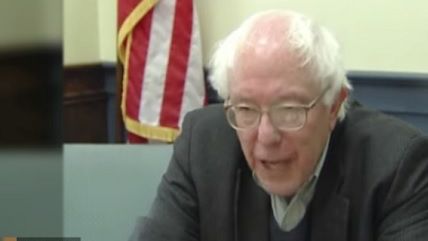 College students feel the Bern in a major way, says a new study of people at 100 universities around the country.

According to Student Monitor, a research-and-content shop for student publications, almost three-quarters of respondents said they planned to vote (yeah, yeah, I know: They also plan to go to that Friday 8 A.M. p-chem class too).

Of those planning on voting, fully 44 percent are going to punch a hole for Bernie Sanders, with just 21 percent coloring in for Hillary Clinton and a mere 8 percent rooting for Donald Trump (probably all of them attend Emory).

And there's this, which can't be making Reince Priebus or any of the dozen or so Republicans who remember that Mitt Romney got his ass kicked in 2012 by the weakest incumbent since Herbert Hoover: "Among those with a preference, 65% plan to vote for a Democrat, compared to 35% for a Republican."

Read more at Inside Higher Ed.

It's easy to file heavily Democratic leanings among college students under "no duh." But that's simply ahistorical. Time was when the GOP could pull huge numbers of the student voters and youth voters (18-29 years old) more broadly. Yes, Barack Obama pulverized Romney in 2012, winning 62 percent of the under-30 vote to Romney's 38 percent. But those numbers were actually lower than in 2008, when Obama pulled even bigger percentages. Yet as recently as 2000, Al Gore and George W. Bush split the 18-24 vote, with each taking 47 percent (Ralph Nader pulled 5 percent, almost most certainly from Gore). Ronald Reagan came close to tying Jimmy Carter in 1980 before crushing Walter Mondale among the youngs in 1984. George H.W. Bush trounced Mike Dukakis among the same cohort in 1988:

Hell, even Richard Nixon pulled 48 percent of the youth vote in 1972 against hippie savior George McGovern. So it's not like Republicans can't do well among younger voters, including college kids. In fact, if they want to win presidential elections, they have to. Or at least stay within 10 percentage points or so.

Republicans are unlikely to do so well anytime soon. There's no question that youth support for Obama was something of an aberration that almost no candidate will match again. He was young, black, progressive, good at soaring oratory, etc. at exactly the right time in recent history. That he was matched up against a broken-down old man who seemed out of touch with almost everything in 2008 and then a blow-dried one-term governor who had created the pilot program for Obamacare in 2012 only served to run up the score among younger voters. Simply put, Obama was a perfect youth candidate while McCain and Romney were terrible youth candidates.

Here's the problem and opportunity for Republicans: Millennials aren't idiots, so they're not simply in the tank for Democrats no matter what (recall the youthful enthusiasm surrounding Ron Paul's presidential campaigns, which was hardly based on Sanders-like promises of more free everything).

In fact, millennials are markedly less partisan than their elders despite having voted big for Obama; they are up for grabs politically and ideologically. But as the Reason-Rupe Millennial poll back in 2014 pointed out, there are certain threshold attitudes that reliably turn off younger Americans. For younger voters, it's "culture first, politics second" and if you're against same-sex marriage, pot legalization, and humane treatment of immigrants any conversation is over before it gets started.

Which is to say: It was nice knowing you, Republicans. However awful Donald Trump is when it comes to immigrants, his chief opponent for the GOP presidential nomination, Ted Cruz, is worse. Indeed, one of Cruz's lines of attack (shared by the editors of National Review and other conservative outlets) is that Donald Trump is soft on immigration. He would, don't you know, allow back into the United States some of the 12 million illegals he promises to deport, thus revealing his sickeningly inhumane program as just "a poorly disguised amnesty" scam!

When it comes to same-sex marriage, which Americans overwhelmingly support, Republican elders have started to hold their tongues about the wickedness of it all, but it may well be too little too late to win the hearts, minds, and votes of millennials. Sixty-one percent of millennial Republicans support gay marriage, which is higher than the overall average for all voters of all parties and all ages. And yet the GOP leadership can't quite hide its moral revulsion at the idea of the state treating individuals in a non-discriminatory way and leading GOP folks ranging from Cruz to Mike Huckabee went out of their way to publicly support Kim Davis, the Kentucky County clerk who refused to abide a Supreme Court ruling legalizing gay marriage. Mounting jesuitical arguments about how it's really the states that should be deciding marriage law (even as Republicans pass laws defining marriage as only between one man and one woman) or that the Supreme Court has overstepped its bounds. Those sorts of arguments may be great in debating tournaments but they alienate just about everyone else who knows exactly what most Republican leaders have bee saying for decades: Gays shouldn't be allowed to get married like normal people. In this, by the way, Trump may be less bad than a Cruz or a Kasich, since part of his terrifying "New York values" is plainly not to give a hoot about people's sexuality. If only he could extend that sense of decency to people's countries of origin and religion.

You can almost hear the geniuses at Republican Central reading surveys of younger votes and just writing them off, like they have done with Hispanics. Who needs them? We can't win them anyway because we won't just dish out free stuff (at least not to kids)! They'll change parties when they get their first job and encounter FICA taxes (that fund Social Security and Medicare, which we refuse to reform)!

It was only a few years ago that it seemed likely a young crop of Republican pols—including Rand Paul, Marco Rubio, Bobby Jindal, Chris Christie, Paul Ryan—would lead small-government conservatism and libertarianism into the political mainstream. Man, wasn't that a time! Rand Paul wowed crowds with lines such as

At CPAC (of all places!), he talked about the GOP having become "stale" and "moss-covered." But the moss won and Rand Paul tacked hard-right during his presidential run, calling for an end to refugees and immigrants from suspect countries, and Marco Rubio promised never to reform Social Security if it was bad for his mother. And the last three Republicans standing are not just weak on the threshold issues millennials care about, they are truly godawful.

The worst part of all this is that millennials don't love or even like the Democrats and their policies. In 2013, the College Republican National Committee (CRNC) issued a report about young voters. Consider this:

Millennials, says the report, don't care much about abstractions such as that favorite Republican bogeyman, "big government." But they are into cutting government spending and reducing the national debt, as they realize both things are strangling their future before it begins. Fully 90 percent agree that Social Security and Medicare need to be reformed now, 82 percent are ready to "make tough choices about cutting government spending, even on some programs some people really like," and 72 percent want to cut the size of government "because it is simply too big." Only 17 percent want to increase spending on defense and just 30 percent said that "marriage should be legally defined as only between a man and a women," with 44 percent saying same-sex marriage should be legal everywhere and 26 percent saying it should be up to individual states.

If the Republican Party is in fact ready to implode over the possibility that Donald Trump could be its presidential candidate, whatever rises up from its ashes would do well to understand what millennials—the single-largest generation in American history—wants from its politics. It's not the played-out, proven-failure, free-government-everything that the wizened "democratic socialist" is hawking, or the neo-con adventurism of Hillary Clinton, each of whom hates Uber, for god's sake. They are doing well among college students mostly because nobody else is talking to millennials about future that might be more free and more prosperous. The future painted by Republicans isn't about innovation and prosperity or living your life as you see fit. It's inevitably about an America where gays are at least still marginalized when it comes to marriage and the drug war status quo is in place. An America where there are no more Mexicans and Syrian refugees and that is great because it has bombed ISIS and whatever inevitably replaces it into submission. Not very inspiring, to say the least.

If the GOP can lay off the culture-war stuff, especially ranking on gay marriage and pot legalization, and stop demonizing the dwindling population of illegal immigrants as the greatest threat to life, liberty, and the American Way, they might have a shot at breaking into double digits with today's college kids. And tomorrow's voters for the next 50 years.