Rep. Thomas Massie: I Stand with Apple in Protecting Encryption

Americans have the right to privacy and security of their digital data. 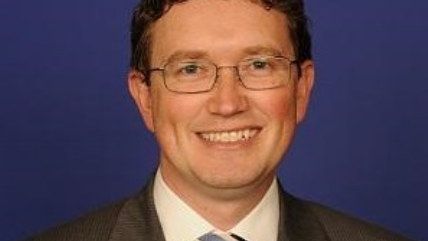 Occasionally politicians slip up and reveal their true intentions. In D.C., this is called "committing candor." While indirectly discussing his administration's effort in the courts to force Apple to develop a software key to unlock iPhones, President Barack Obama recently admitted this battle is not just about a single terrorist's iPhone in San Bernardino, California.

On March 11 at the South by Southwest festival in Austin, Texas, Obama said, "What mechanisms do we have available to even do simple things like tax enforcement? Because if, in fact, you can't crack that at all, government can't get in, then everybody's walking around with a Swiss bank account in their pocket. So there has to be some concession to the need to be able get into that information somehow."

This comes from an administration that defines "tax enforcement" as asking conservative-leaning non-profit organizations whether any of their members ever plan to run for office, demanding transcripts of all their speeches, and even asking questions about the content of their prayers.

Thanks to the president's own words, we know the current battle over unbreakable encryption (and the privacy it affords) is not about a single terrorist's iPhone.

But what about national security? Would it be in the best interests of national security to outlaw unbreakable encryption in the United States? Not so, says four-star General Michael Hayden, the former director of the CIA and NSA: "Even when you're just looking at this through a security lens, that's actually not the best resolution for American security. Put another way, America is more secure—America is more safe—with unbreakable end-to-end encryption."

As Craig Federighi, Apple's head of software engineering writes, "Once created, this software—which law enforcement has conceded it wants to apply to many iPhones—would become a weakness that hackers and criminals could use to wreak havoc on the privacy and personal safety of us all."

As an MIT-trained electrical engineer, I understand the unique technical aspects of this case, and Apple's specific arguments. Apple is correct when it asserts that compliance with this court order would force it to compromise its existing products. Compliance with the order would also compromise the privacy and security of all iPhone customers.

This is why I, along with Rep. Zoe Lofgren (D, Calif.) and Rep. Rush Holt (D, N.J.), drafted an amendment in 2014 to block government agencies from coercing individuals and organizations to build encryption backdoors. Twice I offered this amendment to the annual Department of Defense Appropriations bill, and twice it passed the United States House of Representatives by overwhelming margins. Both times, the appropriation bills were discarded in favor of an omnibus spending bill, but the roll call votes demonstrate solid support for the Fourth Amendment in Congress.

Stymied by our bipartisan coalition in Congress to protect the Fourth Amendment, the administration now hopes to circumvent the legislative process and instead use the courts to weaken encryption. But Americans have always cherished privacy and do not want their government spying on them.

"If privacy is outlawed, only outlaws will have privacy," says encryption expert Philip Zimmerman. At stake in the ongoing court battle between Apple and the FBI is whether innocent Americans continue to have privacy. If Apple loses this landmark case, only outlaws, our government, and foreigners can have privacy and security. I will continue to support Apple and oppose the government's ongoing war on your privacy and security.

Thomas Massie is a Republican congressman representing the 4th Congressional District of Kentucky in the United States House of Representatives.