If Trump gets the nomination, she's going to need the independent spending. 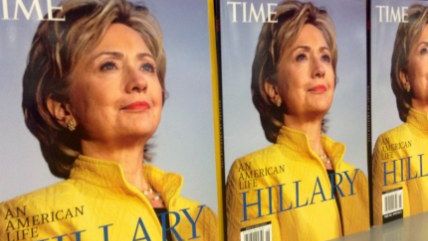 Trying to cover anything this winter other than Donald Trump's campaign at any point when he is in full ownership of the news cycle is an exercise in futility and frustration. I've been the person blogging the Apple vs. FBI encryption fight for Reason, and I can tell whether something I write is going to hit or miss based on how much oxygen is being consumed talking about whatever latest stunt or outrage has come from Trump or his supporters.

This is not a complaint, per se. The media is a business, and its job is to serve its customers' needs. The customers want Trump, either to idolize or demonize, and he is the front-runner for the Republican nomination. It would be media malpractice (and bad business) to not report on him extensively. Hillary Clinton complaining to Chris Matthews at MSNBC that they keep covering him is pretty damn rich, given that she may well be facing him at the polls come November.

The New York Times with the assistance of media firm mediaQuant has attempted to calculate exactly how much more Trump has "benefited" from media coverage and the numbers are yuuuuuuuuge, as they say these days. They're big enough that no doubt Trump himself will point them out at an upcoming rally, while still complaining about how badly he's treated by the media.

Trump has purchased only $10 million in media advertising in through February. But if you calculated all media coverage of Trump as through it were paid ads, he has gotten the equivalent of $1.9 billion in publicity. That's more than twice what Clinton has gotten ($746 million) and more than six times the coverage of any other Republican candidate.

As Times' analysis points out, this doesn't necessarily mean positive news coverage, though given the way Trump manages to spin every negative story about him as some sort of unfair attack, it doesn't necessarily matter. I would be curious to see if it's possible to determine the ratio of "positive" to "negative" coverage for the candidates, though.

When Clinton looks at those numbers, rather than complaining about how unfair it is that Trump is getting more media coverage than she is, she should take the opportunity to perhaps rethink her position that Citizens United should be overturned.

The Citizens United decision, widely despised by the left, makes it possible for organized, unlimited spending on behalf of candidates through political action committees (PACs). Clinton hates it and wants to use overturning it as a litmus test for Supreme Court candidates partly for the extremely petty reason that the case was about a film that was very critical of her.

Presumably (though perhaps we shouldn't assume this is the case) any attempt to restrain political speech by corporations, groups, or unions would naturally exclude media outlets' own speech, as doing so would be a clear First Amendment violation. So had the Citizens United decision gone Clinton's way, it would likely have had no significant impact in the amount of attention Trump is getting and the skewed media dynamic currently in play.

Assuming Clinton and Trump get the nominations, here's the irony: Clinton is the one who needs the precedent set by the Citizens United decision, not Trump. And there is going to be a lot of independent money in play from people who really, really want to make sure that Trump will not be president. If this media dynamic continues to play out, Clinton would be the one hamstrung. Maybe that would have perhaps convinced her (and others on the left) that political spending actually is speech that can help counter imbalances in media coverage, but more likely we'd end up with more complaining about how unfair it is that Trump is getting so much more attention and perhaps calls for the government to have the authority to make it more "fair."

As an additional aside, note that second highest ad spending in the race, after the massive failure of the Gov. Jeb Bush campaign, comes from Sen. Marco Rubio, whose make-it-or-break-it moment is today. If he doesn't win Florida, he's toast. It's yet another reminder that money doesn't buy elections.