French Students Encouraged to Smoke At School Because of Terrorism

Civil liberties increasingly threatened under state of emergency that's been extended for 6 months. 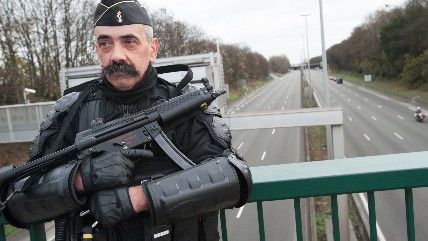 France has been curbing civil liberties

left and right since the ISIS-inspired atrocities that killed 130 people last November. However, there's one freedom that's been expanded in the name of guarding against terrorism: the right of high school-aged kids to smoke cigarettes on school grounds.

In a country where one-third of teenagers are regular smokers, the risk of an attack on a group of students amassed on the street was deemed greater than the well-documented dangers of tobacco usage. The BBC reports that the union of school administrators first suggested a change in the policy banning smoking at schools immediately after the attacks, but was flatly rebuffed by the health ministry.

Regardless, schools have begun allowing smoking on their property even without permission from the national government, which Deputy Secretary General Michel Richard of the administrators union justified by saying, "Students massing on the street constitutes a very high risk, one that is certainly greater than that posed by the consumption of tobacco."

Factually, almost anyone on the planet is far more likely to die from cancer (or a car crash, falling in the bathtub, being crushed by a television set, etc.) than in a terrorist attack, but given the sustained assault on civil liberties in France since last November's attacks (which are overwhelmingly supported by the French public), any expansion of personal liberty can be seen in a somewhat positive light.

France has been under a state of emergency since almost immediately after the attacks, and the mandated 12-day limit on such an order was quickly extended by 100 days. Before that deadline could be reached, France's parliament agreed to let the government's broad expansion of investigative and prosecutorial powers run all the way to the end of May.

During the state of emergency, protesters have been locked up before they've even left the house, private computers have been seized, thousands of businesses and homes have been raided without warrants, mosques and websites have been shut down, and only a handful of terrorism-related charges have been filed as a result of such heavy-handed measures.

The New York Times wrote that of the 28 terror-related charges filed, 23 were merely "for the crime of 'apologizing for terrorism,' or 'praising terrorism.'" The Times correctly notes that , "In many cases, such an act in the United States would be protected as free speech."

There have also been calls to ban the encrypted Tor Browser and free public wifi, and last week a bill passed France's lower house of Parliament which would impose stiff fines and potential jail time on private tech companies who refuse to share encrypted data with the government as part of terrorism-related investigations.

Now France may see significant changes to its constitution, including a provision to "strip convicted terrorists of their French nationality and enshrine the state of emergency powers in the constitution," The Guardian reports.

Given the popular support for allowing the governement to grant itself sweeping powers that largely eliminate due process, it will be interesting to see if France allows its state of emergency to finally expire, after half a calendar year, this coming May.

France24 explains the police's role in the state of emergency in the video below: