Ben Carson Admits His Presidential Campaign Has No "Path Forward"

He isn't dropping out of the presidential race yet. But he might as well be. 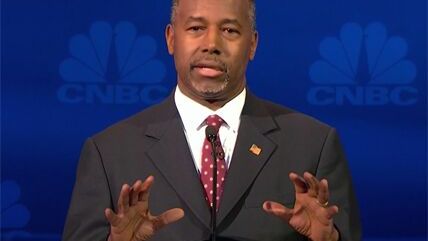 Technically, Ben Carson isn't dropping out of the Republican presidential race. But for all practical purposes, he's dropping out.

Carson, a respected neurosurgeon who has struggled in primary election contests so far, won't attend tomorrow night's GOP debate on Fox News, and he will issue a statement today saying that he sees no "path forward" for his campaign, according to The Washington Post.

"I do not see a political path forward in light of last evening's Super Tuesday primary results," the statement says. "However, this grassroots movement on behalf of 'We the People' will continue."

So even with that admission, he's not ending or suspending his campaign officially. At least not yet.

Carson will address his fans and friends on Friday at the Conservative Political Action Conference near Washington, D.C., and lay out plans for his political future.

In other words, he's quitting the race. He's just not officially saying so quite yet.

Carson never really had much of a chance to win the GOP nomination. As I wrote last year, his appeal was fundamentally apolitical, built on his personality, sensibility, and history of genuinely impressive accomplishments as a pediatric neurosurgeon. That he seemed to know little about the basics of politics and policy was, in some sense, a strength. Throughout the campaign he seemed almost surprised by his own success, by the fact that he was standing on stage with the other top tier contenders, of the GOP field, and that at times, he was beating most of them.

But for a candidate with little to no chance to win the Republican primary contest, Carson performed surprisingly well, rocketing to the top of the polls last fall. In November, Carson briefly closed the gap with Trump in national polls, drawing the frontrunner to an effective tie. For a moment, he was the co-frontrunner. That's something that no other GOP candidate has even come close to managing. Carson just couldn't hold onto his support for very long.

Part of the decline was because Carson seemed out of place after the terrorist attack on Paris last year, and part of that was because Carson made some…unusual statements, like, for example, suggesting that the pyramids were built to hold grain. Carson's sleepy demeanor probably didn't help him either in the end, although it made for an interesting contrast with Trump.

Carson's campaign, then, serves as a secondary illustration of the mood of the Republican party and the strength of its desire for outsider candidates with little or no political experience and not a lot of preexisting knowledge about the particulars of policy.

And yet his failed campaign is also a reminder of how difficult it is for someone to pull off a successful Trump-style outsider run, and how likely those campaigns are to surge briefly and then fail, even with an outsider as appealing and genial as Carson at the helm.