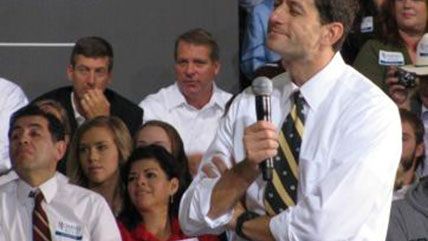 With Donald Trump poised to take a commanding lead in the race for the GOP presidential nomination, one of the big open questions is how the rest of the party will react. A movement against Trump, dubbed #NeverTrump, has taken hold in some circles, and at least one Republican legislator, Sen. Ben Sasse, has said that he'll bolt the party if Trump takes the nomination.

This morning, Speaker of the House Paul Ryan provided a preview of how many Republicans will react to the prospect of Donald Trump winning the GOP presidential nomination. In a statement to the media, Ryan forcefully critcized Trump's refusal to disavow the support of former Ku Klux Klan head David Duke, but did not call out Trump by name, and said that he would support whoever wins the nomination. (Trump later disavowed Duke's endorsement, but white supremacists think the disavowal was insincere.)

"This party does not prey on people's prejudices," Ryan said, according to The Washington Post, adding that the subject of "white supremacists" should not cause GOP politicians to engage in any sort of "evasion."

"When I see something that runs counter to who we are as a party and as a country, I will speak up, so today I want to be very clear about something," Ryan said. "If a person wants to be the nominee of the Republican Party, there can be no evasion and no games. They must reject any group or cause that is built on bigotry. This party does not prey on people's prejudices. We appeal to their highest ideals. This is the party of Lincoln."

This was a strong and clear statement in implicit opposition to Trump, and Ryan deserves credit for making it so forcefully. And yet Ryan also admitted that he will back whoever is on the GOP ticket. "My plan is to support the nominee," he said.

Note Ryan's careful two-step response—rejecting Trump's ideas, but promising to support Trump anyway if he becomes the nominee. Ryan is rightfully repulsed by Trump's response to questions about David Duke and the KKK, yet not so much that he would withdraw his support from the man. Note too that Ryan is engaging in a kind of evasion himself, by declining to name Trump, the object of his criticism.

This is how loyal party actors, even those who, like Ryan, are openly opposed to Trumpism and all of the ugliness that it represents, enable Trump: by attacking the man's statements, but not the man himself, and by pledging to back him should he be the nominee.

One might reasonably respond that Ryan's support is not really for Trump, but for the Republican party. Ryan, who was the GOP's vice presidential nominee in 2012, has always served as a willing foot soldier, and as Speaker of the House, Ryan has made it clear that one of his primary goals is to unify a deeply fractured party. But that only exposes the trouble with committed partisan politics: What is the point of defending the party if it goes the way of Trump? If you don't support Trump's ideas, but you do support his candidacy, what, ultimately, is the difference?

This is not a problem that is specific to Paul Ryan. It is a problem for the Republican party. Ryan is not the only Republican to pledge himself to Trump-as-nominee. Utah Sen. Orrin Hatch told CNN that, although Trump is not his first choice, "If he's our nominee, I'll do everything I can to elect him." In an interview with Politico, Hatch said he believed that Trump could beat Hillary Clinton, the likely Democratic nominee, in a general election. "If I didn't think that," Hatch said, "I wouldn't be a very good Republican." And that, of course, is what this is about: being a good Republican. But not ensuring that Republicans are, well, any good.

Ryan has, at least, been adamant about his opposition to some of Trump's ideas. This morning was not the first time that the congressman has spoken out against Trump's statements. In December, when Trump called for a blanket ban on Muslim immigration to the United States, Ryan passionately declared, "this is not conservatism. Some of our best and biggest allies in this struggle and fight against radical Islam terror are Muslims." Ryan called out Trump's ideas for being antithetical to the Constitution, and said, "that's not who we are as a party."

That is an admirable sentiment, but the success of Trump's campaign so far suggests that it may be wrong. If Trump wins the Republican nomination, he will have proven that that's exactly who the party is. And Ryan will have agreed to bless both Trump and the party he represents with his support.

Update: A few people have suggested that Ryan left himself some wiggle room by saying, "My plan is to support the nominee." I'll grant that this is a less absolute statement than a solemn blood oath to support the GOP nominee no matter what, but it is still a signal of an intention to support the nominee, even if it is Trump, and so has the effect of giving Trump an implicit pass on party-support lines.