Meet Your Mate in This Stoner Party Bus

Stephanie Slade | From the March 2016 issue 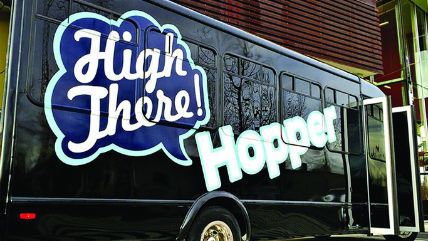 Denver marijuana enthusiasts looking for a place to hang with the like-minded now have one more option available to them. In December, High There!—a dating app, essentially, for people who love pot—began offering the services of a 20-person "hotbox party bus," as the company's Twitter account described it.

It has been legal to purchase, possess, and consume weed in Colorado since Amendment 64 passed in 2012—but not in public places. Smoking in bars or in restaurants or outdoors is not authorized. Livery services such as taxis and limos are permitted to allow toking in their back seats, however, giving High There! precisely the loophole it needed to put its roving cannabis lounge, dubbed the "Hopper," on the road. The company eventually hopes to expand the service to Washington, Oregon, and anywhere else voters legalize recreational use.

For now, the company isn't charging people to join the mobile party; signing up through the app is all that's required. Users can then use GPS to track the buses, which travel along designated routes, making stops at dispensaries and other places of interest. "If Uber and Tinder had a stoner baby," Mashable wrote, "it would be this app."